They have roughed in the electrical on the ground floor, following the plans I prepared for light, switch, and outlet placement. Kevin and Alessandra, who we’ve asked to help with lighting, did a three-hour walk through with Francisc to ensure everything was in place.

Kevin came back with a list of changes they had to make — very minor, all related to placement of elements where there is a column. He also had a few questions for us.

Q: Were we planning to mount the TV on the wall, so that the outlet and connections should up at the mounting location?
A: No. We’ll put in on a table or cabinet with the satellite receiver.

Q: Did we really want those pesky floor outlets? They’re concerned that the placement won’t be right.
A: No, we’ll do without them and rely on overhead lights and lights near a plug in the wall.

Q: Were we OK with wireless remotes for the ceiling fans? Francisc said it made wiring easier.
A: Wireless remotes are fine. We just need to be sure the fans we choose have them or can be fitted with them.

In going over all of this and looking at my plans, I realized that I’d left out switches to some of the lights we added recently. I revised the plans and sent them along.

The other questions related to the network. I had drawn up a plan that included a separate modem and wireless router, like I have at home now. That confused the electrician and the network guy, as they use combined modem/routers. Obviously, no problem here.

They also raised an issue about the three wireless access points I have planned to ensure good coverage throughout the house. Could they directly wire and wall mount them? Again, no problem.

Kevin sent along a picture of his access points. I’m familiar with them and they are supposed to work great. The question now is whether the internet provider Fidoka supplies all the equipment and leases it to us or if we can buy the pieces outright and save some money.

Finally, I asked them to relocate the top floor access point to be closer to the bedrooms so the signal is stronger there. I don’t think it should be any problem.

We started talking about the design of the portone, or front door, last fall. For awhile, we thought we could do a double door with an arched window above, which is very traditional. Then we discovered that the door opening isn’t really big enough for a double door, so we were left with a single door. It’s less common to have an arch over a single door, for whatever reason, but that’s what we decided to do.

So, what will this portone look like? Typically, it’s quite a bit heavier and thicker than an interior door, so settled on that. Our problem was the look of the exterior. Should it be flat or with some “texture”?

We studied Italian doors online and in person and decided there are three main design categories: horizontal slats, vertical slats, and panel.

Originally, I liked the horizontal slat design because I’d seen it in other houses I looked at. Anne was leaning more toward a vertical slat design that incorporated a bit of a panel door design.

We have settled on a raised panel door, sort of like one side of the double door in the picture. We’re now waiting for the door company to draw up the design and cost it out.

We’ve also selected the hardware for the door. Interestingly, the typical portone has only a door knocker on the outside, with no door handle. You push it open and pull it closed with the knocker.

For the inside, we chose a simple handle that’s similar to the interior door handles. Just for fun, we added a slide bolt that just seemed to go with a heavy, traditional door.

We’re still a bit confused about whether the door is always locked when it closes. That seems inconvenient, but it’s the way we understood it from Kevin. Anne has written for clarification.

Today we got pictures of some of the ground floor rough-in work. Kevin highlighted that Francisc had decided that we should have a drain the floor of the laundry/utility room and just installed it at his cost. They’re really great to work with. 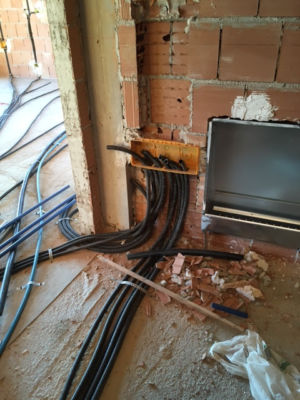 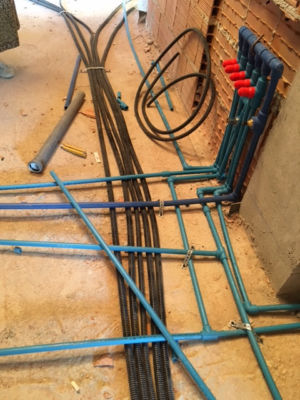 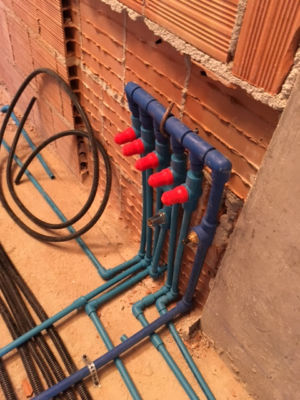 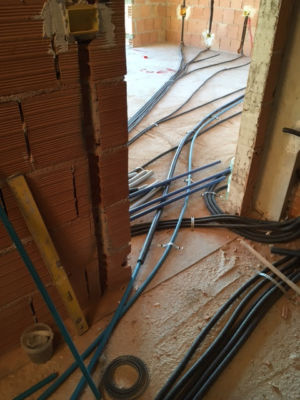 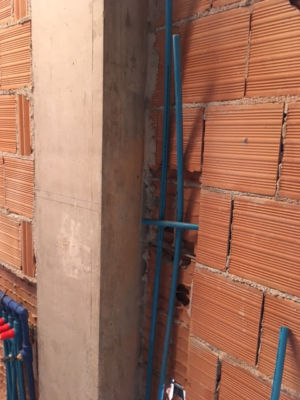 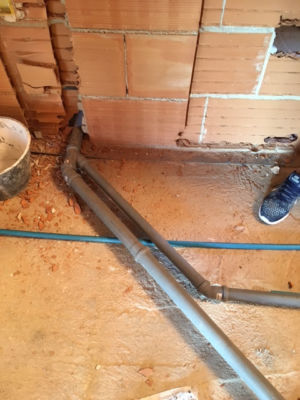 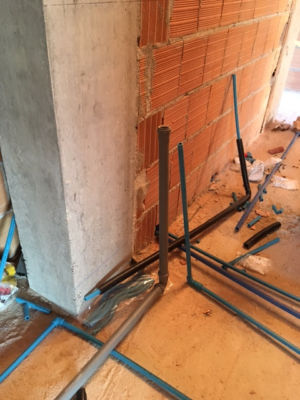 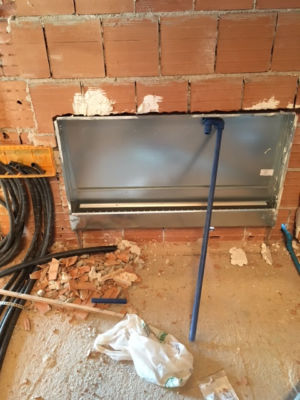 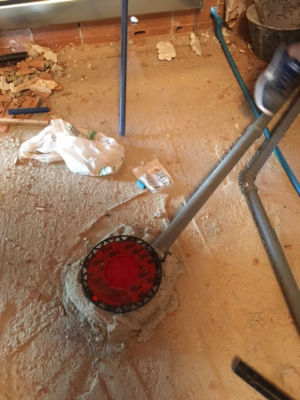 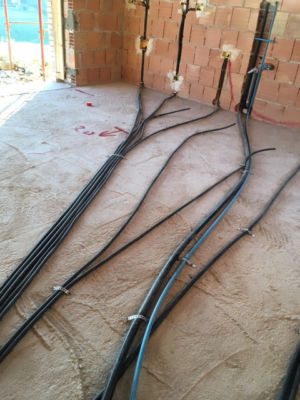 Electrical for the Kitchen
built with GmediaGallery

All the concrete work for the pool is done. Kevin says they could finish the whole thing in a week or so, but clearly there is no time pressure.

I do have to say the view from the pool is quite nice. 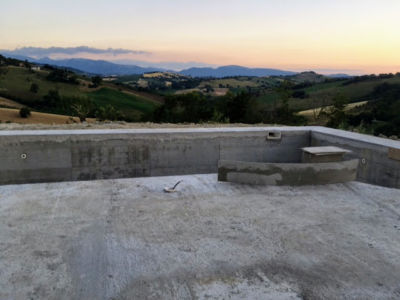 View from the Pool Terrazza 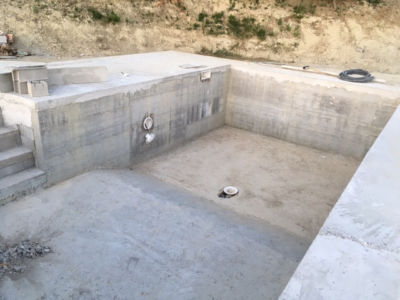 Looking Down the Pool 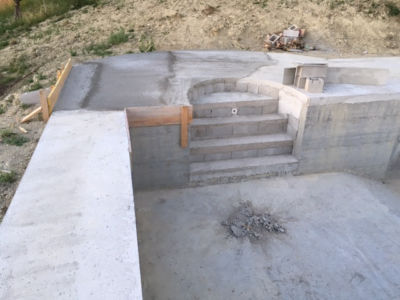 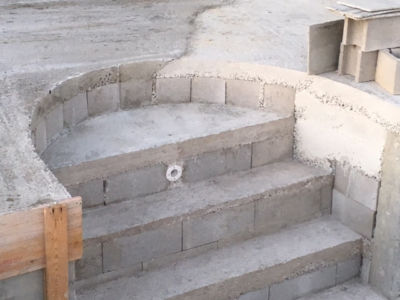 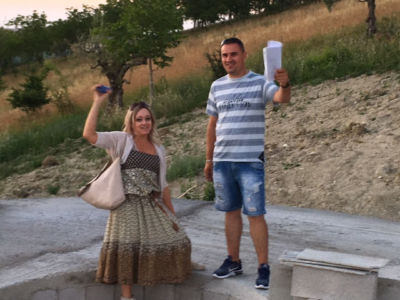 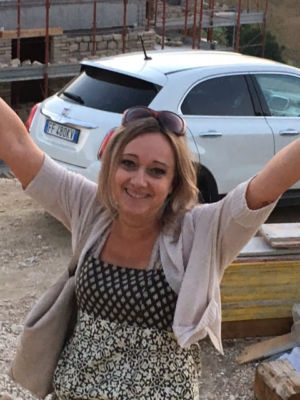 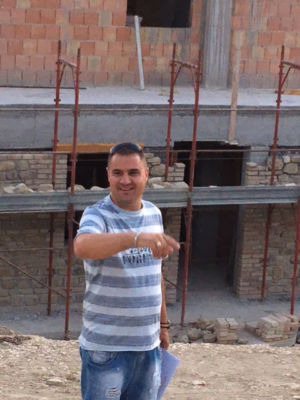 Today’s work was to complete the exterior stone up to the level of the top of the ground floor. Additionally, work was done to install the decorative dovecotes on the back wall.

Here are the photos. 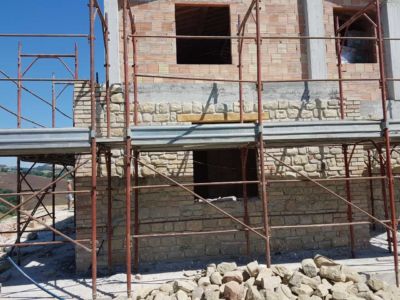 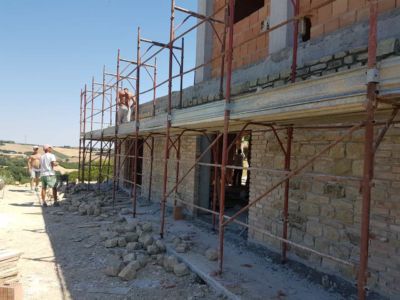 Back Ground Floor Wall in Stone 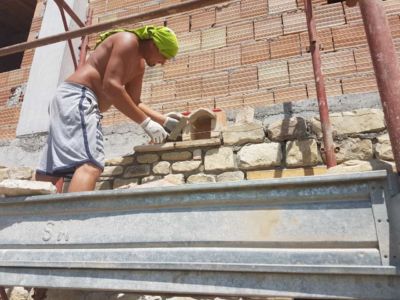 Working on the Dovecotes 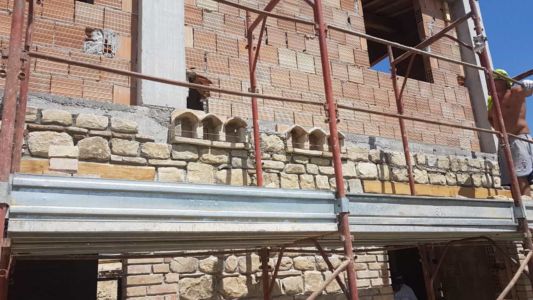 Some Dovecotes in Place 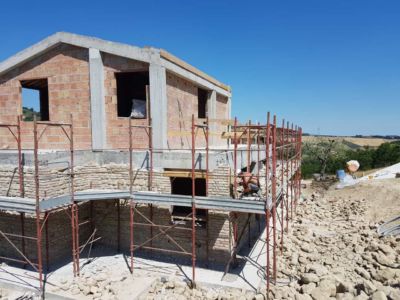