It looks like electricity is going to shock us again. 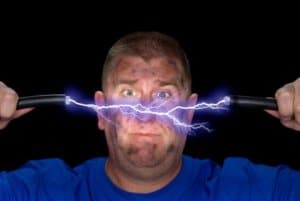 Our first problem getting electricity to our site was our need to put an access pole on our neighbor’s land. After a €1500 payment (extortion), we finally got this approval.

Now we hear that our electric connection is yet to be made, even though we started the process to get installation in November of last year. Kevin says the utility says it will happen in 30 days, but I don’t think anyone thinks this is credible.

This causes some immediate problems, plus it may affect the possible completion date of the house.

Francisc needs “real” power to test the electrical systems, particularly the pool and the solar and photo-voltaic panels. Plus he needs power to continue installation inside. So far, he’s used generators, but they won’t work for these purposes.

As he often does, Francisc came up with a solution to the short-term problem. Somehow he was able to get a “construction connection” under his name. That means the systems can be tested and the work can proceed.

Still, without the permanent connection, the house can’t really be finished. A couple of weeks ago, Kevin gave us a 90% probability it would be finished in December. That’s looking very optimistic right now.

It’s now 5 weeks after we heard the permanent line would be installed in 30 days and that the temporary construction line would be in within a few days. We just heard that the temporary line was installed, with no indication of when the permanent line will be done. This is despite thrice-weekly calls to ENEL, the utility company, from someone Kevin says is very well connected to ENEL.

So our bureaucratic problem continues.

Not much to see today: just the installation of the underfloor heating pipes on the top floor. 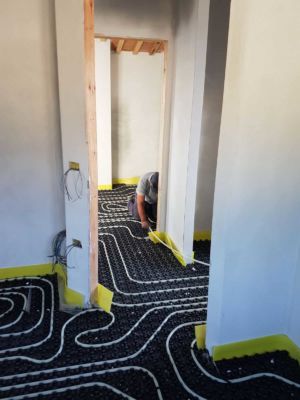 Heating for the Two Bedrooms 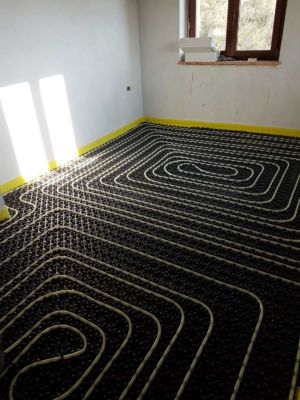 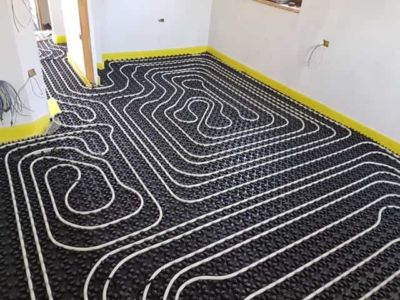 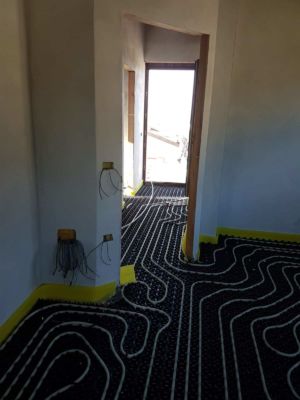 Heat for the Hallway 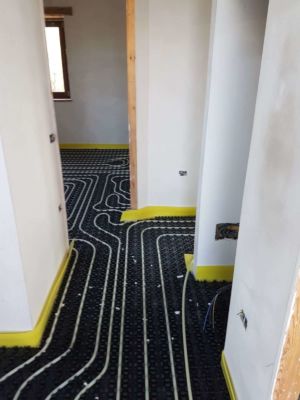 This is probably the most exciting picture set yet: the laying of the waste water lines. I would have thought this was done months ago, but here we are. 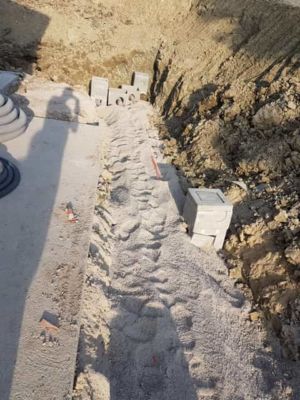 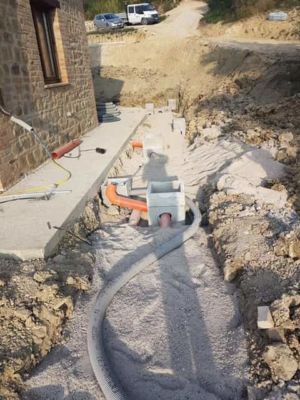 Laying Waste Lines on Side 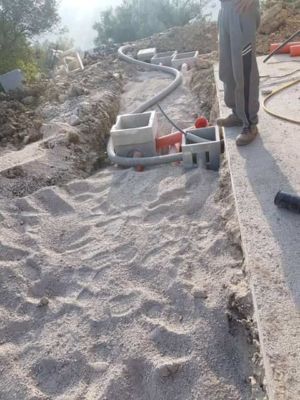 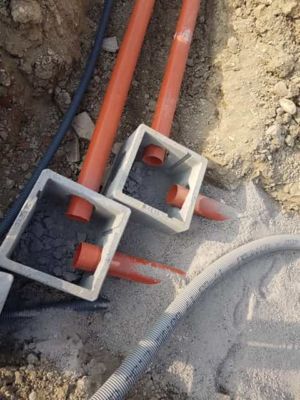 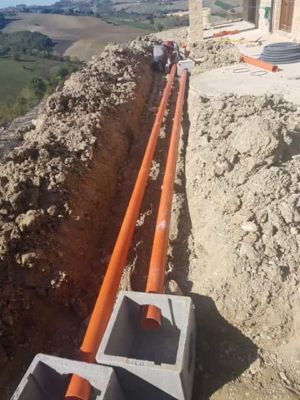 Many months back, I had noticed that there was an awkward place where the roof sections came together near the terrazza. It leaves a gap in the profile of the front side of the house that I didn’t like.

Now that the terrazza is built and the roof sections are in place, I see that I was missing the actual problem. Yes, the look of the area is a bit off, but the real problem is that the walls of the terrace are very low in places, maybe only 50cm (20in) or so. That seems like an accident waiting to happen. It would be very easy to just topple off the terrazza and crash to the ground.

Kevin had missed this detail, too, but saw the problem after I mentioned it. He proposed a railing at 90cm (36in), saying that was standard in Italy.

My quick check of US building codes told me 90cm wasn’t enough. We needed more like 110cm (44in), so the railing is above the waist of most people, making it harder to fall over it.

So, we settled on 110cm. Now, what should the railing look like?

We saw two constraints, one caused by the profile of the roof sections. They aren’t a uniform height, so to have a top rail at 110cm the vertical bars need to be different lengths. Plus, since the appearance concern was still with us, we need to have the railing blend into the house as much as possible.

Kevin sent us 7 choices, asking us to pick two that he would get bids on. There was only one fairly simple option and even it needed to be simplified further.

This option was just horizontal top and bottom pieces, with vertical pieces in between. However, it had a decorative element in the middle of the verticals. We ditched that. Kevin will now get some bids.

The other metal working project is for a handrail in the stairway. Kevin send along a series of options here, too. Wanting to go simple here, too, we picked two possibilities, very similar except for the profile of the rail itself.

Cost of the two handrails was very similar, so we chose the one with the curved edges, thinking it would be more comfortable. Cost of the terrace railing was higher than we expected, but we really have no choice: the terrazza is an accident waiting to happen without it.

The top land terrace in front of the house will be the parking area. While in other places we’re using terra armata to reinforce the earth, Francisc and Kevin think we need to do an actual retaining wall in this place.

One downside to this method is, when looking out from the front of the house, you will see the face of the wall. We’ll need to figure out how to landscape it to soften the look.

Not surprisingly, this retaining wall will be quite strong, supported by the same type of reinforced concrete pilings that are under the house.

Today’s work was to dig the holes, insert the steel, and pour the concrete. It doesn’t make for very interesting pictures, but here they are. 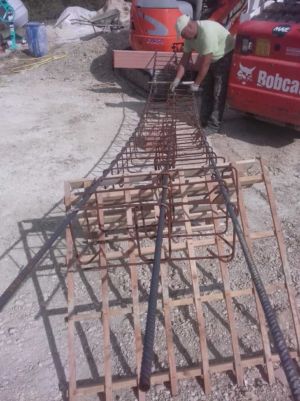 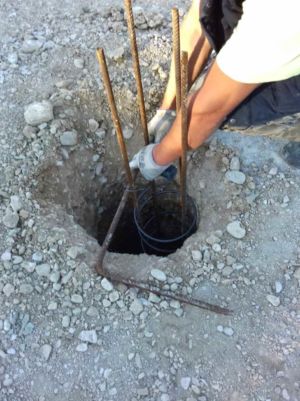 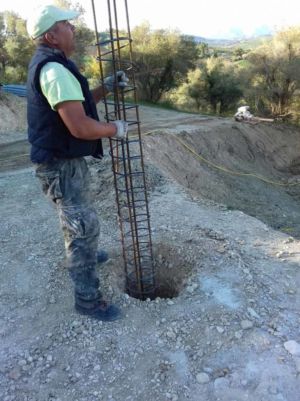 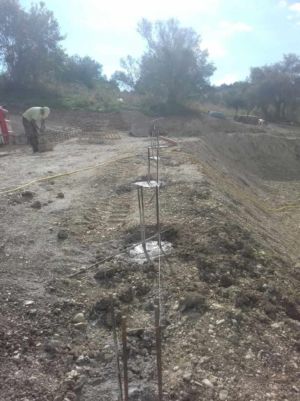 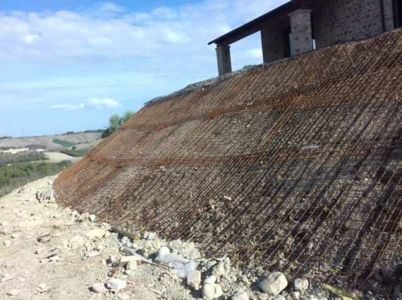 Slope Behind the House 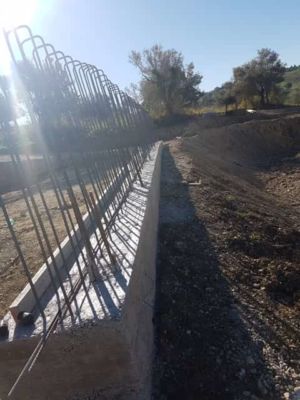