One of the things we were looking for in a house was an open floor plan on the ground floor. It’s not that easy to find. On my first exploratory trip in 2015, I looked at 39 houses, and thought 5 had some potential overall. Only one of these had an open plan. 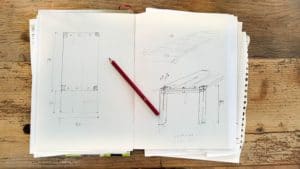 I think there are three reasons it’s hard to find this feature. First, in virtually all of the older, restored farmhouses, which were made of stone, there were interior load-bearing stone walls. If those were to be removed, steel beams needed to be inserted, which would have been fairly expensive. Second, the structural restorations were done a number years ago, when open floor plans weren’t as common, especially outside of the US. Third, many were redone with the idea of renting part of the house to tourists in the summer. That meant dividing the house into apartments and having multiple kitchens.

This year, based on this goal, we saw two finished houses with this feature and two “shells” — houses that had been structurally rebuilt on the exterior but were open inside, except for a few load-bearing columns. We also were shown a plot on which we could build from scratch a house with the open interior we want. All of these were situated to provide wonderful views across the Marche hills.

As Anne has mentioned, we chose this last option.

As part of this option, we were presented with plans for a 160 square meter house (about 1700 square feet) that had already been approved for this location. It had the added feature of a ground floor master suite, which would let us live on one floor when it’s just the two of us in the house, without the need to heat the top floor. (I’m avoiding mentioning that it also reduces the need for my knees to go up and down stairs.)

We had a couple of issues with this design. First, it gave us only three bedrooms, with no space for an office/study which could be used as another bedroom. Since Anne is envisioning constant guests, she wanted this extra room, ideally also on the ground floor. Further, some of the rooms seemed a little small.

Fortunately, we were told that on this plot we should be able to build up to 190m2. (The amount you can build is based on the size of any existing buildings on the land. This plot had a tumbled-down house from which we could “reuse” the space). Interestingly, we could only build within 100 meters of the original building. There are a lot of regulations designed to preserve the character of the land and environs. Overall a good thing, but it does add a whole host of constraints.

Earlier today, we received two proposed designs for a 190m2 house. As you’d figure, we liked the ground floor of one option, the top floor from the other. Since the two designs have different exterior shapes and different stairway locations, we can’t just plop the two floors together. Also, we had a few suggestions about room placement and size.

You never know how someone who has designed a house — or even been involved in the design — will react to proposed changes. Would they think we were destroying their perfect design, thinking we were unartistic slugs, and then unenthusiastically attempt to make changes? Or would they understand that it will be our house, not theirs, so let us go ahead and change it to fit our desires? (I feel like I’m back working with creatives from an advertising agency.)

It’s probably helpful that we have an intermediary between us and the artist, our real estate agent/general contractor Kevin. I talked over our ideas with him. I got no push-back, just some “options to our options.” He’s off to talk to the architect to see what they can come up with.