After we had seen the Casa Ideale property a second time, we felt that it was our top choice, though in our talks with Kevin and in our heads we were still considering the house near Pergola (Casa Col di Luce). We loved that house and property. Our concern there was purely location: could we get integrated at all in the local life from that location? We asked the seller’s agent to “sell” us on the area and its opportunities for us.

After more thinking, and no response to our request, we decided to proceed with the Ideale property. So it was time to try and reach a reasonable deal. 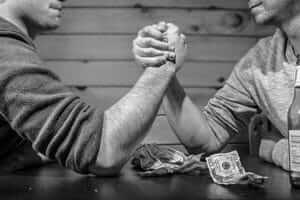 The “negotiation” to reach a preliminary purchase agreement proceeded differently than I expected. Despite being aware of the significant differences in the way the home search process works in Italy versus the US (see this post), I guess I thought negotiation on a price and terms would be a back and forth between us as the buyers and the seller, with the real estate agent, Kevin, in the middle.

Recall that there is only one agent involved here on the Ideale property. Kevin has the property listing, or the right to offer it the market and he has us, as potential buyers. (Neither of these relationships is exclusive.) This “dual agency”, with only agent involved who has brought buyer and seller together, is not legal in many parts of the US. But because of the structure of the Italian system, I think it’s the norm.

Kevin asked me what we wanted to offer. My first thought was that I didn’t want to offend the seller, who I thought was one of the adjacent landowners. That would be getting started in the community on a very bad foot. Kevin told me it was someone else, and he really wanted to sell. It was an Italian who had bought the property intending to build a house for his daughter. She had no interest, so he thought he might make a quick buck selling to some foreigners.

As a starting number, I suggested €50K. Kevin told me he thought we’d meet near the middle and suggested €48K, so I agreed. I figured we’d hear back with a counter offer and we’d go from there.

When I talked to Kevin the next day, rather than asking for a counter, he said he had a deal at €62K. Did we want it? He had told the seller we didn’t want to go beyond €60K and had reached a somewhat complicated deal at €62K. So, after our original offer of €48K, our next step was to say yes or no to this deal at €62K. Nice and neat, right where we wanted to end up. I’m glad we followed his advise on our first bid.

Signing the preliminary agreement and any payment of deposit would happen after we checked some basics. In addition to the survey, land title, and related issues, we needed to have a “positive opinion” from the town planning official that we could build what we wanted on the property. Not a final approval, which would take some months, so this introduced a little twist: might we end up with a plot of land that couldn’t be built on?

Kevin assured us that approval had been given for a house on the property, just not one at the 20% larger size and with a pool. But even the larger house was still at or below the limit for the size of the house that should be allowed under the rules.

Risk and reward. After sorting through the proposed transaction, Anne and I decided it made sense to go forward. Now what?

4 thoughts on “An Italian “Negotiation””