Late in the afternoon of the second day. we went off to meet with the farmers who own the land that surrounds our property. We needed to discuss two topics: get their permission to have an electrical connection pole put on their property, and explore the option of buying some additional land to address some of our land slope issues, particularly those on the front of the house.

Kevin wanted to meet at the property some we could discuss the options on-site, but the farmers, who are brothers, said we needed to come to their main house, about 20 minutes away.

A few weeks ago, Kevin had approached the brothers about the electric line and pole topic. We need about 1-2 m2 of land on which to put an electrical pole that will carry the line from another pole on their land. We won’t own this small square of land, just use it. From this new pole, we’ll have a line buried along our driveway to get to the house.

Kevin’s original attempts to get the brothers to say yes to the pole have gotten snagged on the brothers’ complaints about some olive trees that they said have been damaged by the equipment arriving at our house. (The piece of land they own to the south has a scattering of olive trees on it, but it looks like they haven’t been tended in years.) Further, they felt they had already been more than accommodating by letting our contractor put some supplies and materials on their land and to allow us to reshape the connection from the road to the driveway.

So now the brothers apparently wanted us to pay up. They wanted €2,000 for their permission to build the pole and dig the connection. Kevin was flabbergasted by this number. At €1,000 per m2, a hectare of land (10,000 m2) would cost €10 million — $4 million an acre — clearly an outrageous amount for use of, not even ownership of, a small piece of unused land.

Kevin had gotten them down to €1,500, but they wouldn’t budge from there. He thought that maybe if we were there while he negotiated further, they might soften up and we could get the price down to a more reasonable level. So we were standing by their barn, not saying anything but trying to look friendly, while Kevin went after them again.

Unfortunately, no dice. They weren’t budging. (Anne said later that maybe I should have tried. They might have taken pity on the foreigner trying to negotiate in Italian.)

We had an equal lack of success on the potential land purchase question, but for different reasons. Since the land is agricultural, the brothers receive some sort of subsidy from the European Union to leave it that way. They have an agreement through 2018, so they couldn’t sell any land now. Maybe they’d talk about it in 2019.

Of course, 2019 doesn’t help us in our desire to reshape our land right now.

When we left, Kevin repeated that he thought €1,500 was outrageous. But as of now, we’re left with no electricity to the site. We’ll probably just have to pay up.

This process went on for two more months before Kevin finally got the brothers to sign the paper.

While searching for something else, I came across the first email Kevin sent that proposed that we build new rather than buy an existing house and improve it.

This email came as we were trying to firm up what houses we’d see on our June 2016 trip.

He eased into it …

Thinking about this completely differently.

Then he proposed his alternative. He was right that we were expecting that we’d have to do some work, but we weren’t looking for a complete restoration …

Instead of spending all or most of the budget and given that you are open to a project requiring some work, we approach this completely differently.

Attached is an article set to appear in ITALIA MAGAZINE. The subject is right-sized houses. Places that are done in a smaller overall volume but deliver all the beauty and function of larger houses, WITHOUT the cost and maintenance. There’s a house, CASA IDEALE, with great views, privacy, proximity to town, an open plan architecture and three spacious bedrooms, all done in a roughly 140 sqm format for around €300k. It’s even designed so if it’s just two people, they can live entirely on the ground floor. Projected construction time is 10-12 months. I attach the designs.

This sort of approach could be excellent.

The idea was a sound one. I was trying to keep the size of the house and the cost down.

Since our spec list really focused on buying an existing house in pretty good shape and doing only minor improvements, I might have rejected the idea out of hand if I hadn’t worked with Kevin in 2015. I felt he had a good sense of what we wanted and what was available.

The size and floorplan referred to in the article aren’t very close to the plan we are building today, but we did bite on his concept. And here we are, not with Casa Ideale, but our own Casa Avventura.

Friday, a little after 6. Everyone present who needs to be.

We had done the oral reading of the documents on Wednesday, so we were here just to pass around money and sign the contracts. 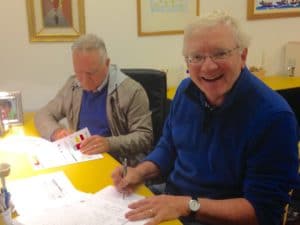 The contracts are in both English and Italian. My translator and my attorney agree that they are the same. The seller, the translator, and I have to sign each page of three copies of the contacts and of the statement that the translation is accurate. As I did in the bank, I have to carefully write out “Edwin Joseph Katzman” each time. Legible, but cursive. Not an easy combination for me.

Just to add some humor to the situation, we also have to sign an energy certificate. This document rates and explains the energy efficiency of the property — in our case, the ruin. (It’s not very efficient. Very drafty.)

To finish up, the notaio signs everything, while having an animated conversation with my lawyer, which I can’t follow. The translator assures me it has nothing to do with my deal. They’re talking about a mutual acquaintance, and not in a positive way.

A few photos, handshakes all around, and we’re done. Anne and I own the land and the pile of stones.