After a break of a couple of hours where Anne and I had enough time for lunch and a small rest, we set off to Kevin’s office. I was sure I knew the way — until we had been driving farther than I expected past San Ginesio. Just as I figured I’d gone wrong, we came around the corner and there was his driveway.

Our topics during the meeting included an overall project review, with timing and budget, a discussion of the electrical plan with a focus on lighting, color decisions about the beams and walls, a little bit about the pool finishing materials, and a brief overview of the structure relative to earthquake regulations. Joining us for parts of the meeting would be Alessandra, Francisc, and Primo.

We started by reviewing the budget and timing. The budget is right now still the same as December, but based on this morning’s look at the slopes of the property, we do have a major unbudgeted expense for dealing with them, either for earth moving, for buying more land, or both.

The construction team still thinks the house can be ready by the end of the year, but the contract date is the end of February, 2018, extended by any days lost to bad weather.

Next, we were joined by Alessandra. She is the architect of the house and we’d asked for her input on some design questions, as well. Anne noticed right away her glittery sneakers, which seem to be the style among young women in Italy these days.

The lighting plan was our first topic. I had done a detailed plan in November, but I had started to wonder if my numbers, types, and placements of lights made sense. I’ve seen some “rule of thumb” charts about numbers and wattage of lights needed that gave me pause.

Alessandra had made some changes to my plan, mostly minor ones, changing some hall lights to sconces rather than hanging lights, converting the recessed lights to cable lights as recessed are hard to do in our type of construction, and adding a light here and there both inside and out.

Not knowing our style, she showed us some design options which were probably too modern, sleek Italian for us. We promised to put together a style guide with pictures to give her some guidance.

Examples of Stone and Brick Work

As a follow-up to this morning’s discussion about stone and brick wall construction, we looked at Kevin’s house as an example. We saw how the bricks and stone of different sizes and fragments are used together to give an irregular appearance, so as to mimic an old stone house. We also saw on his house an example of the stone molding that will be at the top of walls near roof.

Our walls will be similar, even including dovecotes on the back. We looked at his lintels for color and he pointed out that whatever we do they need to be treated every few years because they fade.

Our first topic with Francisc was to look at pool materials and colors. Step one was to pick a liner color. Kevin told us we had a difficult choice to make as Francisc pulled out a color deck with dozens of colors, some of were unbelievably garish. Kevin then pulled a Henry Ford on us: we could have any color as long as it was white or tan. This was a local rule with the goal of making pools blend in more. We chose a tan, sand-like color. In the photo, there’s a blue overlay that simulates what pool will look like with water in it.

We moved on to the pool surround. Again, we had a small choice of materials and colors. Here we went with a brown real stone surround, with the pool border being a light gray.

Now it got a bit trickier. We needed to select a stain for the beams, one that would look traditional, complement the windows, and give us paint color flexibility. After some discussion, we selected a medium-dark color. (When Kevin sent us a picture of this after we returned home, it looked too orange. We hope that’s just the photograph or that the chestnut beams will tone it down.)

Anne had chosen the paint colors she wanted earlier, based on US colors from Benjamin Moore. Not surprisingly, we were able to find nearly exact matches from the European paint colors.

Finally, joined by Primo, we discussed how the structure was designed and built to be earthquake-resistant. This was just to satisfy my curiosity. During the discussion, we learned that the structure had been made even stronger during construction by enlarging some columns and beams.

Now 7:30, about 10 hours after we started, we were done with our first day. We felt we had made a lot of progress. 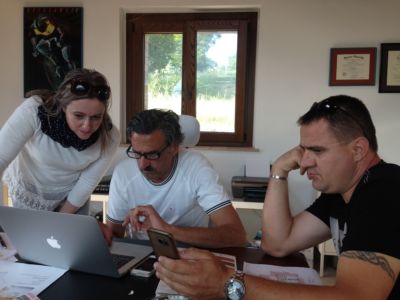 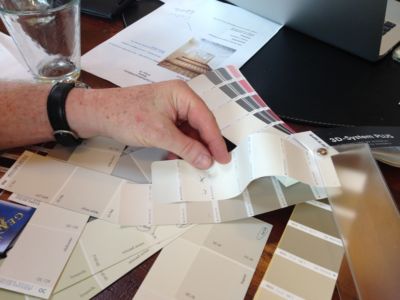 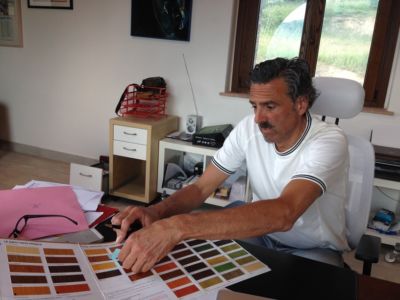 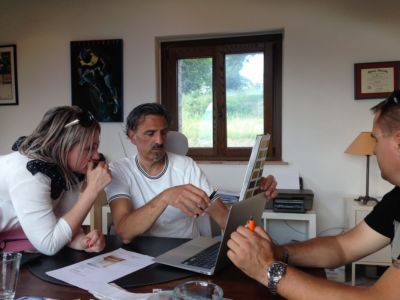 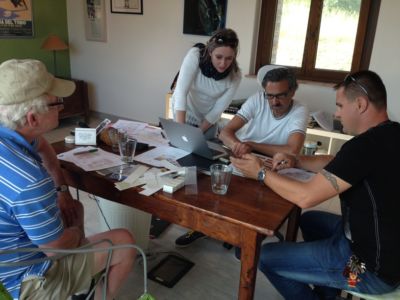 Waiting for a Recommendation 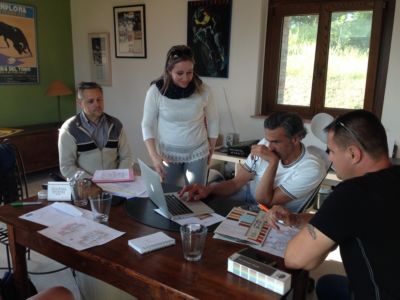