At first, Kevin had thought that the pool design and execution would be done in a late phase, when we’re working on landscaping. As he and I talked about it and the contractor weighed in, it became clear that it makes a lot more sense to deal with the pool in the first stage of construction. We’ll have the excavating equipment on site, the house won’t be there to make access difficult, and the concrete can be poured along with the structure of the house. 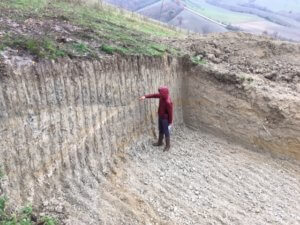 All of these work out to about 40m2, but Kevin thought a pool of our measurements might be more expensive, since it isn’t standard, but he went off to price the options.

Let me interrupt my fascinating post with two pieces of trivia: Kevin said the guideline for pool size is 5m2 for each person in it. Second, I realized later that the 5×8 pool might have been right. Its proportion is 1:1.6, very close to what’s called the golden rectangle for its aesthetic appeal and interesting mathematical properties. For example, to name one, as I recall, the ratio of height to width of the Parthenon is this golden ratio.

As far as other design parameters, we asked for a shallow and a deep end, a stone pool surround/patio where we can do a pergola or something for shade, and a poolside shower. Also, we want the pool oriented so the best view lines up with the best views.

Kevin came back with an estimate that fit the budget: about 40,000€, which seems like a lot for a pool, but what he had told us to expect. This seems to be an all-in cost. Here’s what he wrote:

That includes the structure, liner, cover, filters, pumps, drainage, plumbing, electrical, technical area, border, tiles (you will choose), labor, materials, solar shower, two lights inside, dual depth 140/180, etc. The filtration will be an advanced system that uses very low amounts of chlorine. It will come with a guarantee on works & liner and will be the subject of a contract.

But that’s not necessarily the deal killer. This is: a pool deeper than 180cm requires a lifeguard. We could use it without one, but we couldn’t rent the house.

We also wanted to make sure the pool was oriented to the views.

That resolved, we should be set on the pool.