There were a couple of houses we were interested in that were listed by another agent, Richard, so on Day 3 we went to see them. 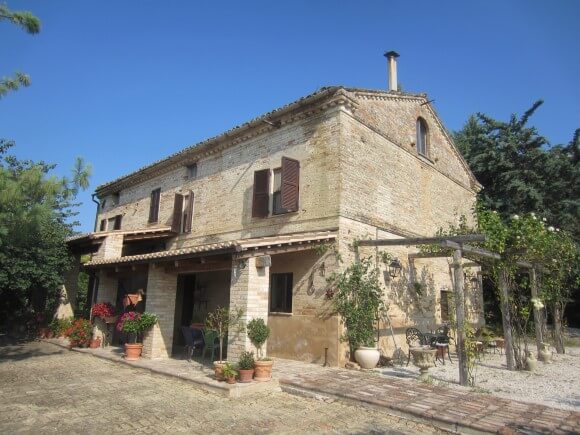 One of the nice features of this house was that it was walking distance to the town of Mogliani, while still being very private. It was a good-sized house, with five bedrooms and five baths and a pool. It also had 80 olive trees and a small vineyard, a plus from my point of view.

But it didn’t show well, as it was totally overgrown and it would be quite a big project to clear the property. But its biggest unfixable drawback was that the living room was rather small and was down a long, narrow hall on the opposite end of the house from the kitchen. We quickly decided to pass on this one. 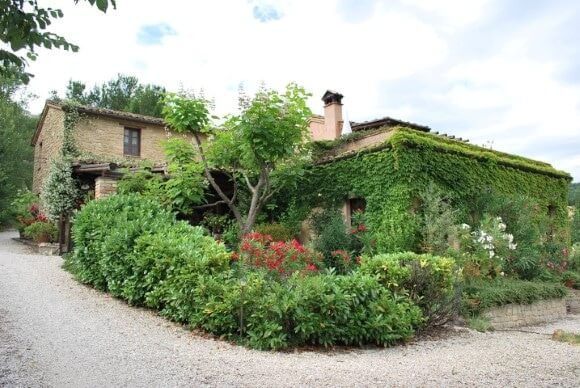 Casa Tranquilla sits below the town of Penna San Giovanni, but still high enough to have panoramic views of the whole valley. We were met by the owners Trud and Udo and their two dogs as we drove up the driveway, and they showed us around both the main house and the apartment in back, as well as the extensive grounds (about 7.5 acres). 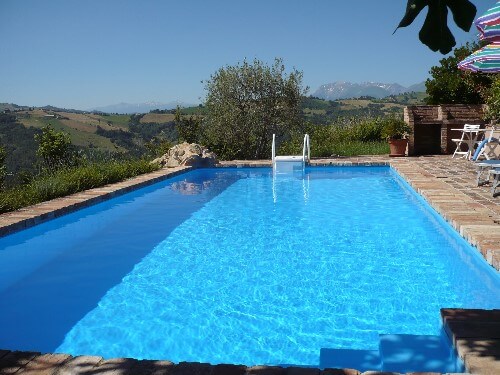 The house itself was a charming country cottage that had been thoughtfully restored to maintain its character and vintage details. It had a wonderful loggia in front, where I could picture enjoying all our meals in good weather. Inside, the floor plan was a bit quirky and chopped up. The master suite was on the ground floor and there was another bedroom upstairs, but without a bath. The upstairs hallway had a door leading to the apartment, which could be closed off or left open and integrated into the main house. The apartment itself was great, and provided a 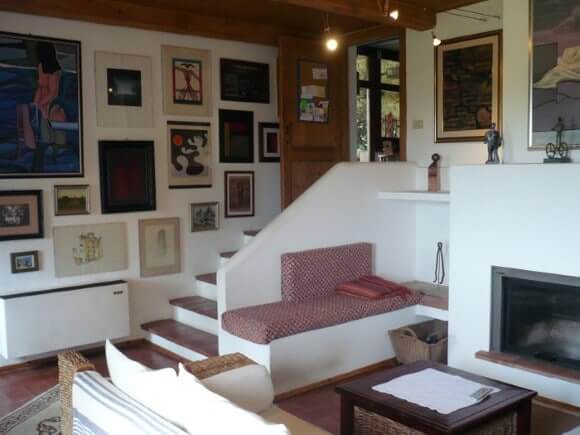 nice rental income in summer for Trudi and Udo. It had a bedroom, bathroom, kitchen and living room, plus a large, partially covered terrazza with incredible views.

The property was awesome. Besides the pool and the views, it had lots of olive and fruit trees as well as a bocce court. There was also a barn in back, where Udo had his art studio and workshop.

It was hard not to love this place, but we decided the inside space was too awkward and didn’t have the right rooms in the right places, so it probably wouldn’t work for us.

After we returned from seeing these two houses, we decided to go back to Casa Ideale (the ruin) to have another look at the property and discuss whether the option of building a new house was something we would really consider taking on.

The neighboring farmer had blocked the lane with his truck so we had to stop short of the property and trudge through the fields to get there. But what a view. 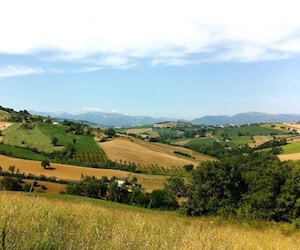 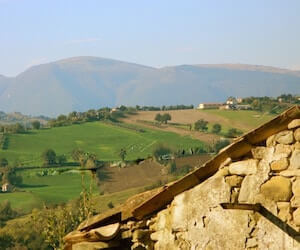 We discussed the size of the house we could build, how and where it might be sited to take advantage of the views, where the pool would go, etc. Most importantly, could we actually pull off building a house in Italy while living in Chicago. This would have been a non-starter if it were not for the fact that Kevin, in addition to being a real estate agent, also worked as a general contractor, overseeing restoration projects. He had a team of architects, builders and other tradespeople who could do this for us, and he would be in constant communication with us to give us progress updates and get our feedback. We were intrigued with the notion of building something to our own specifications and not having to live with awkward floor plans or someone else’s taste in interior finishes.

We also felt it was a plus that the property was close to two towns: Colmurano and Urbisaglia. We really want to get involved in local life, so this was important to us.

We had a lot to think about, and our decision was made all the more confusing by the fact that we were comparing apples, oranges and grapefruits when it came to what property to buy. We had two fully finished houses in contention, a couple of partially reconstructed houses and a ruin.

That night we had a long discussion over dinner, helped along by a couple of bottles of local wine.