It seems we keep circling back on this issue, looking for a really good solution that probably doesn’t exist, given our constraints.

During our trip in May, we had come face-to-face with the problems the slope of the land was causing, both in front and behind the house. While there, we outlined a solution for the problem in back and discussed various options in front.

After that visit, Alessandra had proposed a solution for the front of the house. Paula, the landscape designer, had chimed in with another attractive solution, adding an additional level to allow a car to be parked right next to the kitchen. (My knees liked that idea.) Kevin cautioned us that Paula’s solution was likely to be expensive, as we’d need serious earth reinforcement to support a car in that location.

Kevin started getting bids on both Alessandra’s and Paula’s solutions. He passed on renderings of Alessandra’s approach, which used the terra armata reinforcing technique on the slope above the house.

This terra armata solution seemed to be the best, but Anne had raised a concern about whether we could plant on top and sides of the terra armata structure, given its internal reinforcement.

Paula was in agreement on the terra armata above the house, but wanted the cemento armato technique — the same method used the build the house — used to build a “shelf” for the car near the kitchen.

Kevin’s cost estimates confirmed that adding the parking shelf would be expensive, on the order of €15,000, on top of the costs for the terra armata in front of the house. (He also told us that Francisc had worked a great deal to supply both the earth and the earth-moving to implement the solutions front and back.)

So we all gather at the property to work this out.

First, Kevin and Paula assured Anne that we wouldn’t be limited in what we could plant by the terra armata technique. Second, we decided that we needed to forgo to lower parking space, as it was just too expensive.

One new issue popped up. In Alessandra’s solution, the path from the parking down to the house was on the right side, where the slope was more shallow. This made sense, but directed visitors to the kitchen door, rather than the front door.

I proposed adding an access, via stairs, that would go from the parking directly to the front door. While this path might not be as practical for everyday use, it did return the focus to the center of the house and the front door. We decided to build this new access into the landscape plan.

So, I think we have the overall plan settled. Next steps will be for Francisc to get the earth moving done and for Jimmy to draw the resulting levels, which will be input to Paula’s landscape plan. I hope we can make this move quickly.

Next, we went inside for a look-see. Having seen the pictures from just a few days before, not much had changed on the ground floor and without the stairs or a ladder in place, we weren’t able to see the top floor.

We did discuss the design on the fireplace. I was interested in having a curved front rather than just a straight line. After reviewing some options, we settled on a mostly straight front, but with the corners tapered, to make it more interesting. We’ll have a raised hearth, wood storage below, arched firebox. brick and stone below mantle, old wood piece as mantle, and a tapered plaster wall above. Rather traditional, overall.

After we had finished our pow wow, Anne and I walked the property down to the pool, to see what it looked like and to see what the house looked like from down there. Anne climbed down into the pool and made an important discovery: the shallow end of the pool isn’t very shallow. 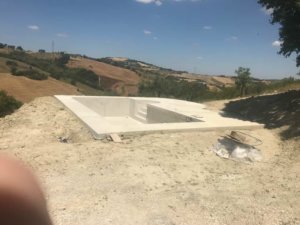 When we had designed the pool, our concern had been with the depth of the deep end. For safety and legal reasons, we couldn’t go past 180cm (71in). This took our focus off the shallow end, planned at 140cm (55in).

When Anne stood at the bottom of the shallow end, we realized just what 140cm was. She wouldn’t be able to stand up without the water coming up to her nose. Hmm. Clearly, we needed to address this and make the pool less deep at this end.

When we raised this with Kevin, he said that 140cm was a standard depth in Italy. (Anne discovered on line that a US pool would typically be just 90cm (36in) in the shallow end.) He promised to discuss with Francisc if we could adjust this depth.

After we returned up the hill, Anne raised another interesting point: did we want the grout on the interior stone wall to be the same as the outside stone, or would it look better if it were a little lighter? Lighter seemed right, but we decided to get Alessandra’s view.

Kevin has reported that we can reduce the pool depth, but it takes more than just pouring in some more concrete. It will require some rebar work to tie the new concrete to the old. We decided 120cm (47in) would be OK, but I’m still wondering if we shouldn’t reduce it to no more than 100cm (39in).

On the grout, we decided that a shade lighter inside was the way to go. 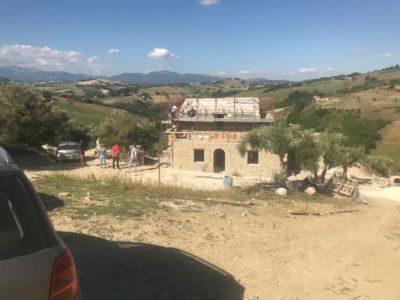 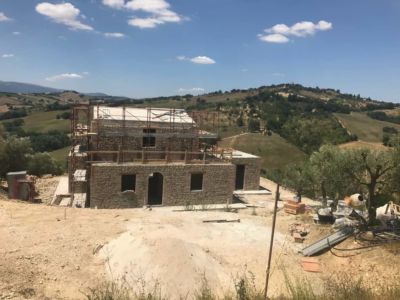 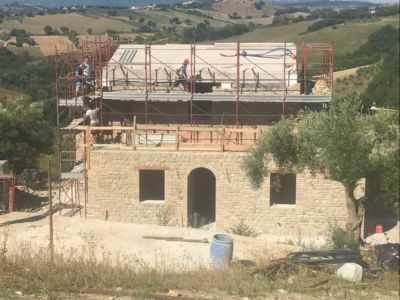 Our Team Ready to Meet 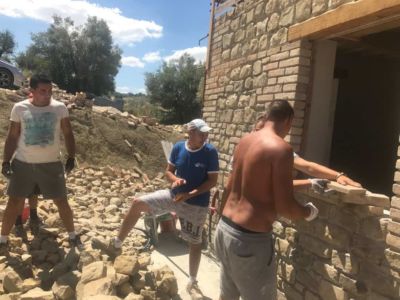 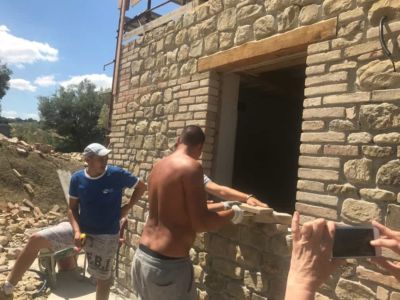 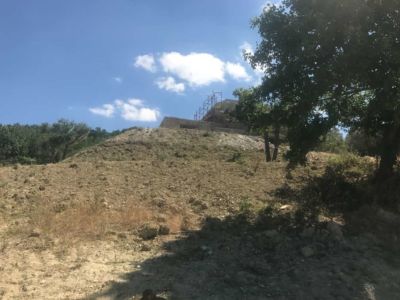 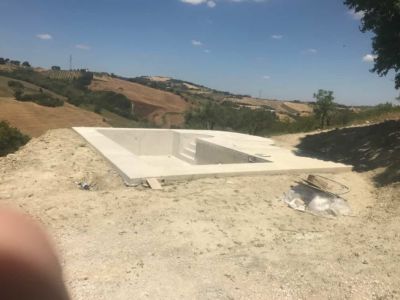 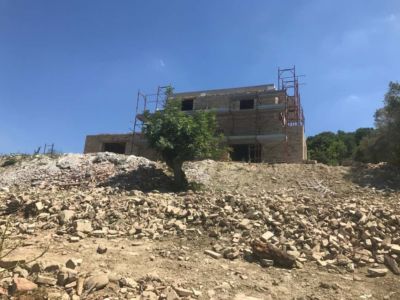 House from the Level Below 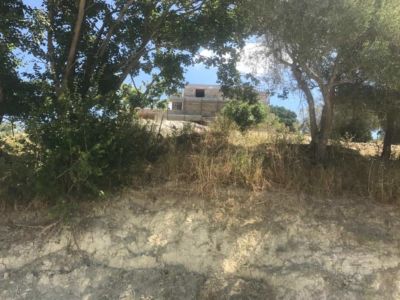 House from the Pool Level 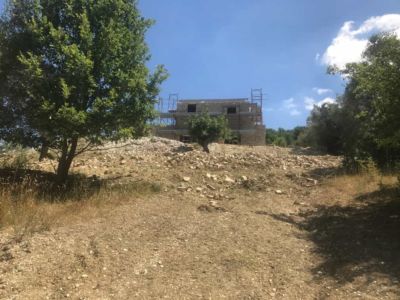 View Back Up the Hill 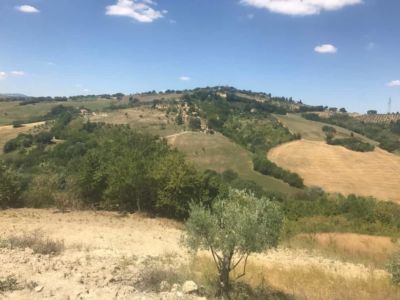 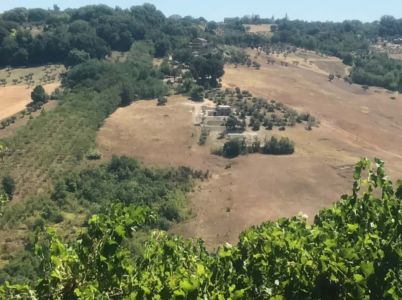 Casa Avventura from Across the Valley 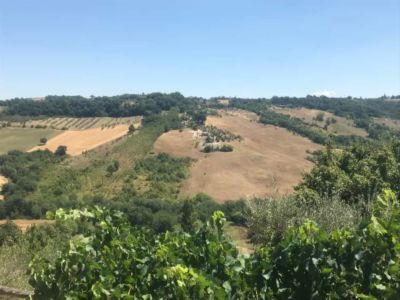 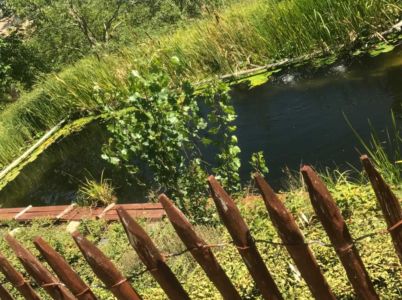 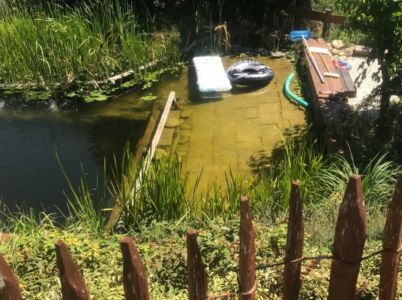