Kevin wanted me to see a couple of houses where he’d managed the building and reconstruction . The primary goal was to focus on the windows, doors, ceiling beams, and flooring, since those are some of the items we will need to choose early in the process. 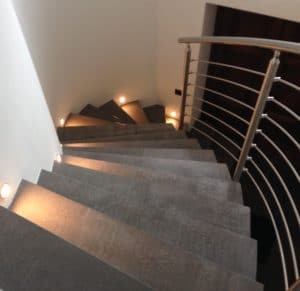 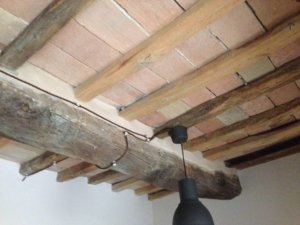 The first house offered a lot of stimulation to know what we don’t want. It was very contemporary inside, which makes it in keeping with modern Italian, but that’s not the look we’re going for. All it really offered me was the idea of including dovecotes, in an otherwise unappealing exterior, and a better understanding of under floor heating.

The second house was more to my liking. It was more rustic, closer to the look we want. Both the beams and ceiling treatment and the flooring offered some good examples, as did the fireplace.

The best resource I discovered here was the owner, Michael. Originally from New York, he moved to Italy from Miami full time last spring. He had found his house through Kevin, and then Kevin managed the restoration. The purchase was in 2012 and the house finished in 2014. Michael said he could have done it more quickly, but he wanted to stretch the process out to fit the timing of some other events.

He still works for a law firm in Miami, so one of my first questions to him was about the quality and speed of the over-the-air internet, the only way to get connected out in the Marchegian countryside. He said it took some fiddling by the supplier to get it right, but he said he was pleased with it once it was tuned. (It uses an on-the-roof receiver/transmitter, connecting into a cellular network, I guess.)

I also asked him how easy – or difficult – he had found the process of getting connected to the local community. He said that, while he was not naturally extroverted, he had made it a point to “put himself out there.” He said he always introduced himself when he went to a new place, a restaurant or store, and told them he’d bought a house nearby and was there full time. Since Marche is off the beaten path, the locals don’t meet a lot of Americans who have done this.

They really like Americans, especially those who are trying to use their language. They started telling their friends all about the new guy, and soon Michael knew a lot of people.

He’s also an avid cyclist and he meets people through this shared interest.

Overall, it was a very positive message, and it points out our need to find some activity we can get involved in once we’re here. Too bad I don’t knit.

Two nights later I took Michael to dinner so I could get more perspective on the house building process and some other issues related to making the move. We were supposed to go to a restaurant in a small town, but it was closed when we got there. The earthquakes of the night before had made a mess of the inside of the restaurant: wine bottles fell off the wall, etc. apparently no major structural damage, though, as he thought they might reopen in a day or so.

We ended up going into Tolentino, one of the good-sized towns in the area. We went to an eclectic restaurant where he knew the owners. One of the things I had was an antipasto plate, the meats on which came from the town of Visso, near the epicenter of the previous day’s earthquake. The owners wondered about the future of their supplier, and said maybe this was the last salume they’d receive. A bit eerie.

Michael and I talked about residency, but his situation is totally different. He has Italian heritage, so it’s relatively easy for him to become a citizen. He said the big draw was access to the low cost, high quality health care.

We talked a bit about Kevin as a construction manager. He pointed out that they have become good friends, through cycling and otherwise, and I took this as a sign that he had been pleased overall. He said Kevin tries really hard to make sure the client gets what he needs — we’ve seen that, too. Michael also said he thought that Kevin continually worked to learn more nd more more about building options and resources, so he expected our process would be good, maybe even smoother than his.I like that Kevin was not content to just do the “same old.”

One recommendation he offered was to look at using a (wood) pellet heating system rather than gas. He said, while more expensive upfront, it pays out rather quickly. Kevin had thought gas was better for us, but I’ll need to ask him again about it.

Michael offered his ongoing help, which I think will be valuable, as an American who has navigated the waters and is sailing along.