Today, the internet components were installed, along with the railings for the stairs and the terrazza. Plus, the painting of the stair risers was done.

Because of our location out in the country side, we’re getting our internet over-the-air from towers across the valley. This system is in widespread use in Marche.

Last we heard about railings was when Kevin told them “no” on the original color and we then picked a new color that coordinated better.

As we decided a week or so ago, the risers were painted to help hide scuff marks.

For the ground floor bathroom, Anne wants to use an old piece of furniture as the vanity, rather than having something built in. We had tried looking for such a piece on our July trip, but found that older furniture is not that easy to buy in Italy. There isn’t the number of antiques stores or markets that there is here.

We could keep looking on future trips, or we might be able to have something built just for us. Anne sent along some ideas to Johnny, the carpenter who is building our shelving and some custom doors, so we could explore what we might be able to get.

This would be a very simple, mostly open, cabinet made of new wood that the sink would sit on top of. Neither Anne nor I liked this one.

Something Using Some Old Oak

Johnny has found some very old oak planks. I say “something” because there are two ways to use them: build a cabinet like the one above, or have just “floating” wooden shelves attached to the wall, with the sink on the top one.

We both liked the wood, but neither of the executions.

This is really what we’ve been looking for from the beginning. Johnny found this old cabinet, probably French, he thinks, and proposed a way to rework it into a base unit with a framed mirror above. The sink would be slightly sunken into the top to get it to the right height.

This all looked very good, except for the use of the top decorative piece as the top of the mirror. It seemed to be a bit too heavy.

This one is our choice for the vanity.

However, we don’t want to walk away completely from either the decorative top or the old oak boards. We may find a place for the top, and we’re going to talk to Johnny about building a desk or a table out of the oak planks.

Here’s how it turned out. We think Johnny did a great job. What do you think? 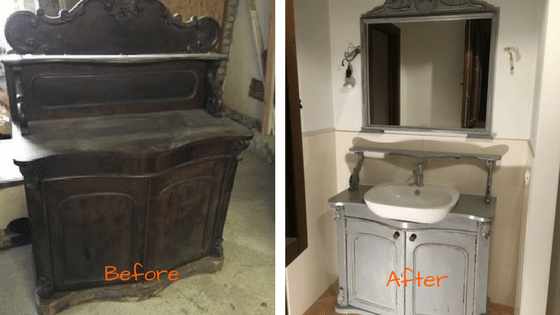 We sent Paula’s long-awaited landscape plan off to Kevin for consultation with Francisc and for their comments.

Overall, we got a not-unexpected “yes, but …” reply.

Overall, it looks nice. The key is that on this first pass you got something you can work with. Now, we need to get it to where it can be executed starting in a 3-4 weeks.

Now on to the specifics:

On the stairs directly down from the parking to the stairs, there was no mincing of words. 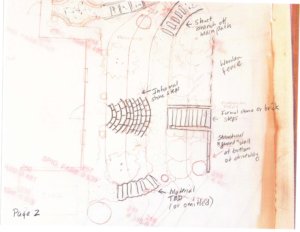 Nobody this end — me, Francisc, others — thinks it’s a good idea to execute a staircase directly from the front door to the parking lot … it’s too steep and the costs of doing it (in anchored, reinforced cement) could be prohibitive.

This one point Anne and I won’t budge on. We’ll just hope the costs are manageable.

On the other access paths in front of the house.

I would be careful to not “junk up” the front of the house with two many stairs, trails, paths … ONE would be fine and that lets the house and planned plantings speak for themselves.

On the idea of a “guard wall” at the bottom on the driveway, his thoughts are clear.

No additional walls are required at the driveway/parking lot … I don’t understand why that’s been suggested.

This one is trickier for us. We do have a concern abour cars going over the edge, based on our past visits, but the situation may have changed. We’re going to leave this guard wall out of the plan, but think about putting some large planters there to define the edge better than the wooden rail fence will on its own.

Moving to the back of the house, he had only one major concern.

I would not put a pergola on the back of the house — this would essentially defeat a key design element of the house — all those big french doors that bring light into the house. If the pergola is covered in vines or plants, or even if it’s there unencumbered, it will block sunlight into the house … if you need shade (and you will) head under the portico or onto the 1st floor terrace. Note that with the quality of insulation in the walls, door/window glass and roof — WAY BEYOND a normal house — the idea of too much heat coming in is a non issue … plus, a pergola will require permissions … plus, it’s something you could always add LATER, so see if you really need it before spending money on it and blocking light.

He’s convinced us here. No pergola for now.

Now it’s time for the clincher and he’s spot on here.

Paula needs take the lead on this and specify exactly what is needed. I can help, certainly, but she needs to lead (and she needs to do that LITERALLY as soon as you say you like the plan as is)

My job is to back to Paula and get her to step up and take charge.

Paula did go to the site and explain the plan to all involved: Kevin, Francisc, Pippo and his son Marco, who will do the landscape installation. While the relationship between Paula and Kevin and Francisc can be quite testy, she seemed to hit it off with Pippo and Marco, which apparently helped to lighten the mood.

Next is for Francisc to plan and cost the stairs and for Paula to get to work on the planting plan.

To do some custom shelving and doors, Kevin has brought Johnny on to the project team. He’s from England, now living nearby.

Primarily, we wanted him to execute the wooden shelves for the built-in wall niches in the office and in the bathrooms and to handle the two closets, downstairs coat closet and upstairs linen closet, by supplying doors and shelving.

We had sent along some ideas for the niches a number of months ago, but hadn’t really addressed the closets until today.

We received a draft layout for the linen closet.

Our only surprise was that there was shelving shown above the closet, built into the wall. We had assumed this would just be flat wall. This we needed to think about, as having the shelves extend all the way to the ceiling beams, at nearly 9ft, seemed like it might look a little strange.

Kevin’s main questions to us focused on the shelves inside the closet: how many and with what spacing.

I played around with some options, wanting to leave enough space at the bottom to store one or two portable air conditioning units, and to have useable spaces above for bedding and towels.

Eventually, I started to wonder if we wouldn’t be better off using adjustable shelves sitting on shelf pegs. I wasn’t sure if this was done it Italy, but it seemed to be the best solution.

Ultimately, we decided on just one shelf, or two openings, above the door, maybe for decorative items, and movable shelves inside.

Doors? Johnny recommended using some old doors in a style similar to the rest of the interior doors. That seemed right. The only open question is the finish for the doors.

This one is a little maddening. Given the overall height of the nicchia, if we have four openings, they will be 22.7cm high. Guess what? A typical book is 23cm tall. If we’d just built the overall opening a few, maybe 10cm (4in) bigger, we would have been all set for four levels.

Since we can only do three levels, rather than make each 32cm high, we elected to make the bottom level taller, which gives us space for bigger books below and regular books above.

Luckily, Johnny and Kevin came back to us with a revised layout. When we said just one shelf/two openings above the linen closet door, we expected the area above to be flat wall. They were a bit unclear, and thought it made more sense to have a tall, open space above, so they asked what we wanted. We clarified our desire to close off the top space and make a flat wall.

We’re all set on the simple layout for the downstairs coat closet.

For the doors, Johnny has found some old oak doors, now painted ivory. He recommended that we strip them, leaving a few flecks of paint in place to give a bit of a weathered look. That’s sounds good, so we’re now set on closets.

Kevin identified a new issue today. He pointed out that while the stair treads are tile, the risers are just painted, and since the paint we are using is light, the risers will get scuffed and dirty very easily.

He had faced this same issue in his own house, which he addressed by painting the risers in a color and with a method that reduces the visibility of the scuffs.

The idea is to use a color similar to the stairs and to paint them with a sponge method that yields a surface that hides some of the imperfections.

He sent along a number of color choices. These were the finalists, chosen for compatibility with the tile color.

We chose the lighter option, on the left.