When we were thinking about the exterior of the house, Anne noted that many houses we have seen look stark, because there are no plantings along the foundation. She said she wanted to have some plants near the base of the walls, including some rosemary and lavender.

I asked Kevin about this. He said that traditional construction in Marche has a marciapiede, a sidewalk, surrounding the house. This is done primarily for practical reasons, as it keeps water from right next to the foundation.

Typically, a marciapiede is 80cm (2.5 ft) wide and you put the plantings on the outside of it.

This seemed fine for most of the house, but we wondered if it shouldn’t be wider in some places, especially in the back of the house outside the French doors.

We already have the portico outside the kitchen French door, so our fix was to widen the marciapiede outside the rest of the back to 140cm (3.7 ft) and add a little more width outside the bedroom door, forming a bit of a terrazza.

Here’s a diagram of the planned marciapiede. 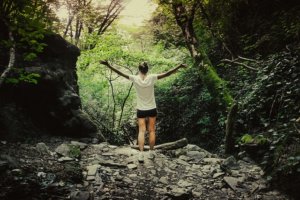 When I was in Marche a few weeks ago, I asked Kevin about the electrical plan. I had assumed the architect or geometra would handle this and we’d comment. (The architect and geometra have overlapping roles. The architect has more formal training and certification, and seems to handle the big picture elements of the design. The geometra handles the details, plus acts as a surveyor and project manager.) 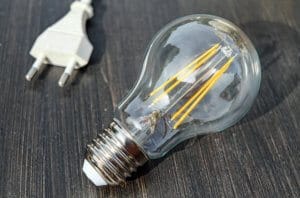 He told me that I ought to make the first pass at an electrical plan. I was happy to take this on, as I wanted to avoid some shortcomings in our current house. (This house was built in 1946, so some of the weaknesses, such as outlet placement, remain today. Also, an addition was put on in 1997, which was done without paying attention to some details. For example, we have light switches behind doors which could have been avoided by hinges on the other side or switches on the other wall.)

Kevin gave me a couple of examples of plans past clients had done. I thought they were a bit incomplete in that they left out some important details, like switches in general or the connection of which switches to which circuit.

My goals for our plan were to make sure we have enough outlets and in the right places, having logical switch locations and connections, and appropriate built in lighting. (One thing I wanted to avoid was hanging lights in the main room, as it seemed to me they’d look awkward hanging out by themselves.)

I also wanted to be sure we’d have good wireless internet coverage throughout the house.

I’ve probably been through five or six iterations of the plan, which included the network plan, which I wrote about before. I’m fairly pleased with the plan as it stands right now.

I tried to meet our goals by including an outlet on almost every wall inside, using quad outlets in high use areas like the office and kitchen, and waterproof outlets for outside; clearly showing switches and the connections to circuits and using three-way switches and dimmers as appropriate; building in recessed lighting in the main room ceiling and in the walls in the stairway; and providing connections for outside elements like landscape lighting and irrigation system wiring.

I’m also wanting to have a separate ice making machine, as Italians don’t use much ice and refrigerators don’t have ice makers, so I specified a special outlet for it. (I’m not sure if I can make the ice machine happen. Those I can find online that would work in Italy might be too big or too expensive.)

I considered, briefly, the idea of a “smart home” with special outlets and switches and smartphone control, but I found it’s pretty expensive and when I thought about it, would be more for fun than useful. We can just use timers instead of computer controls.

When Kevin saw this, he called it, “one BEEFY electrical plan.”

He’s off this week to discuss the plan with the network and electrical specialists. I’m hoping that the plan won’t be too expensive to implement. I’m counting on the incremental cost of a few outlets and switches as being fairly small.

I’m writing this post now mostly so can show this cool diagram — which I don’t completely understand.

It shows the plan for the underfloor heating. The different groups of pipes are shown by the colors. They come together in a ground floor zone and a top floor zone which can be controlled separately.

Cooling the house will be done by a progression: 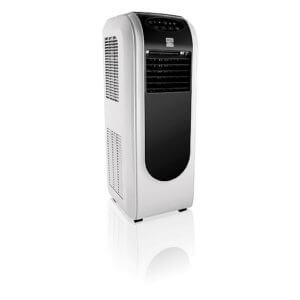 These portable units and only cost a few hundred euro, so using them is MUCH cheaper than building an air conditioning system for the house. We’re building vents into the walls in the bedrooms so the units can exhaust the warm, moist air to the outside and we won’t need drain pans that have to be emptied.

In the design, only two spaces didn’t have a window: the laundry/utility/pantry and the stairway. No problem with the first one; we wouldn’t want to give up the wall space in include a window. We can use it more efficiently.

The stairway is different. We didn’t want that to be dark in a house that otherwise should be full of light. 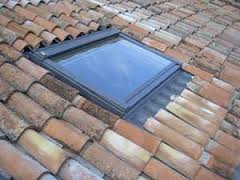 Beyond the lack of a window, I thought the design was for the stairway side walls to be solid, full height, rather than being half-height or there being a railing. That would block the light from the top floor. Off I went to Kevin for clarification and to propose an additional window on the front of the house.

He had the architect send the CAD visualizations of the stairs and there is a railing instead of a full-height wall. Good.

Both the architect and Kevin thought the window on the front was not a good idea. It would give the front of the house a strange, unbalanced look. I had to agree.

They proposed a skylight instead. We decided against that option, as we were concerned that it would look out of place on this house and that skylights seem to like to leak.

My return proposal was a window in the other wall of the stairway. This side is not particularly visible from the front of the house and a window would look fine there.