In addition to the three DOP products unique to Marche, there are two IGP foods made only here. (There is a different version of ciauscolo made in Umbria.)

(Read about the DOP classification system.)

A pork sausage that dates back to at least 1700, when it was devised by the poor farmers as a way to use much of the hog. It’s made from the shoulder, the ham, the bacon, and the fat, plus wine, garlic, and pepper.

Traditionally, it was made in winter, when the tenant farmers had more time and the lower temperatures helped preserve the meat.

The texture is soft and smooth, resembling a paté. It is sometimes called “il salame che si spalma“, the “salami that you can spread.”

It is produced in the inland areas of Macerata, Fermo, and Ascoli Piceno provinces and the southern part of Ancona.

There is a sagra in Moresco (FM) in early September.

You can see some more good pictures of the making, cutting, and drying of the pasta.

The methods date back until at least the 1400s when it was made in a local abbey. Traditionally, it’s eaten with a meat sauce, but in a true marketing way, they say it’s delicious “with other sauces or simply with extra-virgin olive oil and a small spoon of Parmigiano.”

There is an annual sagra celebrating the Maccheroncini during the first ten days of August.

Campofilone is a comune of about 2000 people. The center of town lies a bit inland from the Adriatic, but there is a beachfront of about 1.5km. 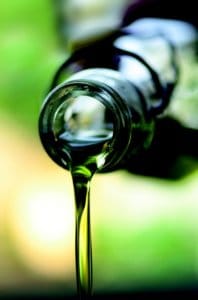 This yellow-green olive oil can be grown and produced anywhere in Marche. It can be made from up to 12 varieties, 10 of which are native to Marche: Ascolana tenera, Carboncella, Coroncina, Mignola, Orbetana, Piantone di Falerone, Piantone di Mogliano, Raggia/Raggiola, Rosciola dei Colli Esini e Sargano di Fermo. Oil from these must make up at least 85% of the product. The other up-to-15% can come from two other varieties that have been grown in Marche for centuries: Frantoio e Leccino.

(These varieties show up in other Marchegian DOP/IGP products: Ascolana tenera is also the olive used for Olive all’Ascolana and Frantoio and Leccino are used in L’Olio EVO di Cartoceto.)

Olives have to be picked by December 15 and processed with 2 days of collection. It must stay under 30°C (86°F) during processing.

The flavor is described as mildly fruity, mildly bitter, mildly spicy. (All score 2 out of 7 on these scales.) There is a little variation toward a little lighter and a little more intense. The odor has a mildly herbaceous note and can have hints of almond or artichoke. 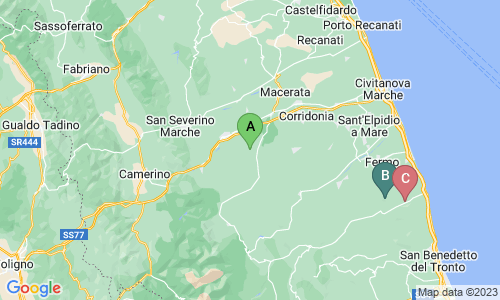 In another post, I wrote about the 13 foods from Marche that have one of the special designations (DOP and IGP) and what the designations mean. Here I’m going to write a little more about the 3 DOP products that are unique to Marche. All three are from the province of Pesaro e Urbino, in the north of Marche. I’ll write about the other products, and more, in subsequent posts.

As of now, I’m going to need to base my descriptions primarily on information from the website of Marche Tourism and those of the locales and the producers.

“There are a thousand types of casciotta cheeses made in central Italy. but only one Casciotta d’Urbino.” So starts the description of the cheese on the website of the consortium of Casciotta d’Urbino producers.

It may sound like marketing fluff, but the distinction of DOP which it has received indicates that experts in Italian food have singled it out as a special type of Casciotta. It is described as a sweet cheese, tasting of the milk it is made from. It’s very soft and spreadable.

The cheese is made following a method more than 2000 years old. It starts with a mixture of 70-80% sheep milk and the remainder from cows. After pasteurization, the milk is heated to body temperature and the fermentation begins. After the curds form, it is drained and put into molds, which yield cheeses about 5-6 inches long, 2-3 inches long, and weighing 1.5-2 pounds. The aging lasts only 20-30 days.

The recommendation is to drink a young, fruity white or rose.

The sagra is in late April.

Carpegna is a comune on the northern edge of Marche, near Emilia-Romagna. It sits on the edge of a large mountain park, Parco Naturale Regionale di Sasso Simone e Simoncello. Though the comune is only 30km2 (11 mi2), it’s the only area that can produce this DOP prosciutto. There are two variations: San Leo, delicate, and La Ghianda, more intense and aromatic.

Being near the mountains, Carpegna is at an altitude of about 750m (2500 ft). It’s said that a key element in what makes Carpegna ham special is the microclimate. Temperatures are moderate summer and winter and humidity is low.

Said to have a sweet aroma and taste, the ham has been produced here since at least the 1400s. Using a special method of seasoning applied to the meat from hogs fed on acorns, it was produced only in small quantities until the 1970s, when production started to be more commercial.

After a seasoning process of about 20 days, the prosciutto is aged for at least a year. The result is meat of color ranging from dark red to pink, surrounded by a layer of pure white fat. Each ham weighs between 8.5 and 10.5 kg (19-23 lb)

The sagra is the third weekend in July.

The consortium uses some “interesting” advertising, judging from the image at the right. Not only is the picture suggestive, the caption reads, “Only son.”

It’s hard to say much about what distinguishes this oil from other Italian extra-virgin olive oils, especially the DOP ones.

A production factor noted on the website of the corsortium is that the oil is made only from the olive fruits and not from the pits, but I’d guess this is true for all DOP olive oils.

Also, the olives need to be gathered by hand, by a long-handled rake-type device, or by shaking the tree, and not touch the ground. All that can be done “pre-processing” is to separate out the foliage and wash the fruit. Oil need to be processed within 48 hours of picking.

Oil from the fruit is made by simply grinding the fruit, pressing it, keeping the temperature below 25°C (77°F), extracting the solids and water via centrifuge, and filtration. No heat, no chemicals, no second or third pressing.

Getting oil from the pits is a more involved process that uses chemicals and which includes heating, cooling, and steaming.

The varieties of olives used in this region vary from others, which is what probably makes the Cartoceto oil special. The formulation is at least 80% oil from three varieties: Leccino (harvested in late October, lightly fruity and sweet), Raggiola (harvested in early November, more fruity and herbaceous), and Frantoio (harvested in late November. adds an almond-like note). The remainder, up to 20%, can come from a selection of 7 other cultivars. The DOP region where the olives come from and where the processing is done covers only 5 comunes in Pesaro e Urbino, in the north of Marche.

The consortium’s FAQ has some interesting notes:

Sagra is in early November.

In another post about Marchigian wines, I discussed the various classifications: DOC, DOCG, and IGT. There’s also a classification system for traditional foods.

It uses a similar nomenclature, covering a geographic area and setting down rules that must be followed, and meets the European Union standards for a classification.

One classification is DOP, Denominazione di Origine Protetta. This certifies that a product was made/produced and packaged in the designated region by farmers and artisans using only traditional methods. There are about 138 DOPs in Italy, 6 in Marche.

One illustrative non-Marche example is aceto balsamico, balsamic vinegar, from either Modena or Reggio Emilia in the region of Emilia-Romagna. Produced in one of those places, using the traditional methods, etc., and it can be DOP. Balsamic vinegar produced elsewhere isn’t DOP and can’t be called tradizionale. So to be sure you’re getting the DOP product, you need to look for the DOP label.

The other classification is IGP, Indicazione Geografica Protetta. These products satisfy some of the DOP requirements, including place of production or processing, but not all. There are about 83 of these in Italy, 8 in Marche.

(There is a third classification, SGT, Specialità Tradizionale Garantita, but there are only two products: mozzarella and pizza napoletana, neither of which is strongly connected to Marche.)

A bit confusingly, though these designations are based on geography, DOPs and IGPs for the same products show up in multiple regions, in some cases.

In the following chart, I’ve listed the classifications which apply to Marche and have indicated if they are solely Marchigian.

Marche produces about 10.7 million cases of wine a year. That’s over 120 million bottles and you’ve probably only had one type, but didn’t realize it was from Marche: Verdicchio. Neither had I until I started exploring the region. 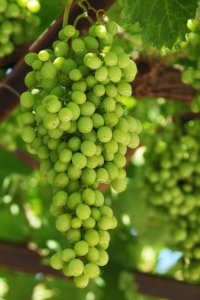 Of that 10.7 million, about 60% has no special “classification.” It is called vino da tavola, or table wine. Much of it is probably made for home consumption or local distribution, where a classification wouldn’t really apply.

The remaining 40% of Marche’s wine would fall into three groups, based on where it is produced and how it is made. (These classification groups are used throughout Italy and are in line with European Union practice and procedure.)

The biggest group is called DOC, Denominazione di Origine Controllata. This certification means that a wine is produced from grapes grown in a defined area, following standards of both composition and method of production. There are 15 DOCs in Marche.

Here is an example of some of the rules for Marche’s largest production red wine, Rosso Piceno:

However, it’s important to know that DOC is not a certification of quality, but only of area and procedure.

That’s where DOCG, Denominazione di Origine Controllata e Garantita, comes in. Not only must these wines follow geographic and production standards, they must be approved by government tasters as meeting quality standards. These are the wines you see with the numbered label attached to the neck of the bottle. Marche has 5 DOCGs.

The other classified group is IGT, Indicazione Geografica Tipica. This is the most general classification, meaning the wine is produced in a way typical for the region. Marche has 1 IGT.

That makes IGT sound like average wine, but it’s not. One of the reason the classification was to allow designations like Super Tuscan, which is quality wine but doesn’t quite fit the DOC/DOCG system, for reason like blends or non-indigenous grape varieties.

Federdoc, a consortium of Italian wine producers, has a very nice map and chart of Marche’s wines.

Based on data from italianwinecentral.com, I put together a table of all the classified wines from Marche, showing production and principal varieties used. The two major ones are Verdicchio (white) and Montepulciano (red):