Today, the internet components were installed, along with the railings for the stairs and the terrazza. Plus, the painting of the stair risers was done.

Because of our location out in the country side, we’re getting our internet over-the-air from towers across the valley. This system is in widespread use in Marche.

Last we heard about railings was when Kevin told them “no” on the original color and we then picked a new color that coordinated better.

As we decided a week or so ago, the risers were painted to help hide scuff marks.

We have a bunch of pictures today showing progress inside the house.

It looks like the bathrooms are nearly complete. Fixtures are installed and the windows complete.

Kitchen installation has begun, with a number of cabinets in place. I’m impressed with the installers’ lab coats.

Many of the lights have been put in place prior to final installation.

In the background of one picture showing work in the main room. you can see that the fireplace has yet to be built. All that is installed is the exhaust tube. But we did get a picture of the piece of old wood that will be used for the mantel.

To do some custom shelving and doors, Kevin has brought Johnny on to the project team. He’s from England, now living nearby.

Primarily, we wanted him to execute the wooden shelves for the built-in wall niches in the office and in the bathrooms and to handle the two closets, downstairs coat closet and upstairs linen closet, by supplying doors and shelving.

We had sent along some ideas for the niches a number of months ago, but hadn’t really addressed the closets until today.

We received a draft layout for the linen closet.

Our only surprise was that there was shelving shown above the closet, built into the wall. We had assumed this would just be flat wall. This we needed to think about, as having the shelves extend all the way to the ceiling beams, at nearly 9ft, seemed like it might look a little strange.

Kevin’s main questions to us focused on the shelves inside the closet: how many and with what spacing.

I played around with some options, wanting to leave enough space at the bottom to store one or two portable air conditioning units, and to have useable spaces above for bedding and towels.

Eventually, I started to wonder if we wouldn’t be better off using adjustable shelves sitting on shelf pegs. I wasn’t sure if this was done it Italy, but it seemed to be the best solution.

Ultimately, we decided on just one shelf, or two openings, above the door, maybe for decorative items, and movable shelves inside.

Doors? Johnny recommended using some old doors in a style similar to the rest of the interior doors. That seemed right. The only open question is the finish for the doors.

This one is a little maddening. Given the overall height of the nicchia, if we have four openings, they will be 22.7cm high. Guess what? A typical book is 23cm tall. If we’d just built the overall opening a few, maybe 10cm (4in) bigger, we would have been all set for four levels.

Since we can only do three levels, rather than make each 32cm high, we elected to make the bottom level taller, which gives us space for bigger books below and regular books above.

Luckily, Johnny and Kevin came back to us with a revised layout. When we said just one shelf/two openings above the linen closet door, we expected the area above to be flat wall. They were a bit unclear, and thought it made more sense to have a tall, open space above, so they asked what we wanted. We clarified our desire to close off the top space and make a flat wall.

We’re all set on the simple layout for the downstairs coat closet.

For the doors, Johnny has found some old oak doors, now painted ivory. He recommended that we strip them, leaving a few flecks of paint in place to give a bit of a weathered look. That’s sounds good, so we’re now set on closets.

Kevin identified a new issue today. He pointed out that while the stair treads are tile, the risers are just painted, and since the paint we are using is light, the risers will get scuffed and dirty very easily.

He had faced this same issue in his own house, which he addressed by painting the risers in a color and with a method that reduces the visibility of the scuffs.

The idea is to use a color similar to the stairs and to paint them with a sponge method that yields a surface that hides some of the imperfections.

He sent along a number of color choices. These were the finalists, chosen for compatibility with the tile color.

We chose the lighter option, on the left.

Kevin made a site visit and came back with a good report, except for one detail.

Inside, we covered a bunch of points. All positive, except one. I rejected the railing and handrail. I did not like the color and I felt the finish was a bit too glossy. It will be repainted. I will followup on this until it’s how I think it should be. The actual work is excellent and the style is ideal for the spaces. This is just the beginning of work to fine-tune the finish work. I am a notorious P.I.T.A. on this stuff…

It’s great to have a PITA on site and on the ball.

After a long meeting in a smoke-filled metal fabricating shop and having looked at 40 options, narrowed it to 8, Kevin came back to us with three railing color options, recommending we choose from two of them.

(In the pictures is a sample of the door and window hardware. The real issue is to be sure they go together.) 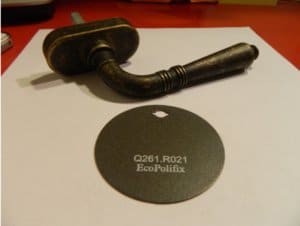 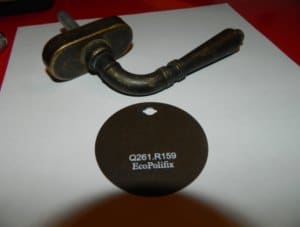 We chose the one on the right, which was also Kevin’s choice.