It’s been about 3 weeks since we received any photos. Anne asked Kevin if work was progressing, and he responded with a bundle of photos showing a lot of different projects underway.

The front of the house is looking very nice. Work is continuing on the retaining wall up the hill.

Tile is going in the kitchen area of the main room and on the marciapiede that surrounds the house.

The terrazza tile is done, and the views from the terrazza looking southwest are wonderful.

Inside, the stone wall is grouted and the heating control box is connected to the underfloor tubes.

Also, the interior is being prepped for painting, some of the bathroom fixtures are in, and utility connection boxes have been set in the ground outside.

Here are all the photos of the various projects underway. 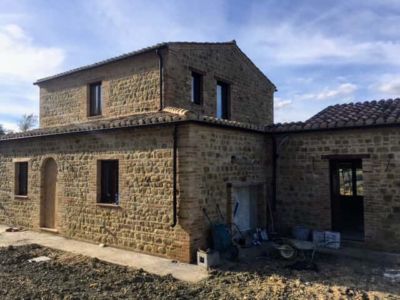 Front from Kitchen Side 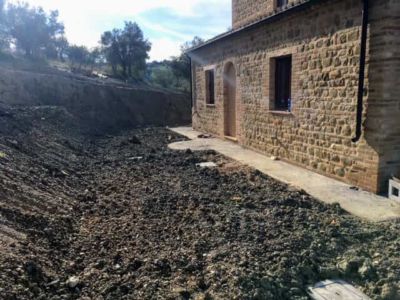 Looking Across the Front 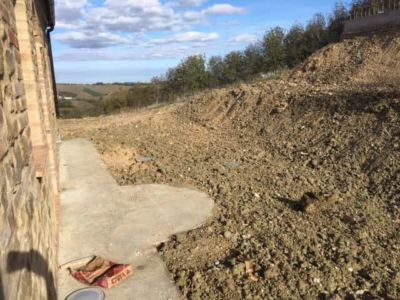 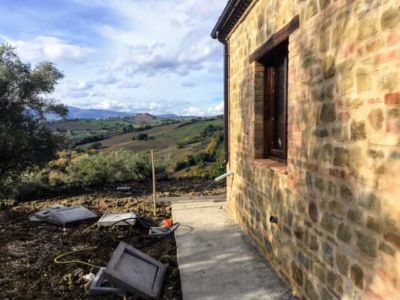 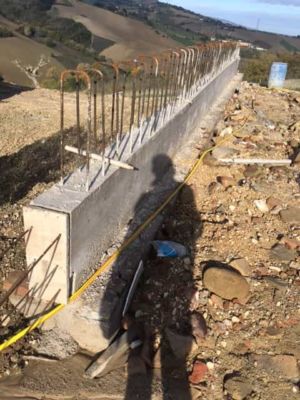 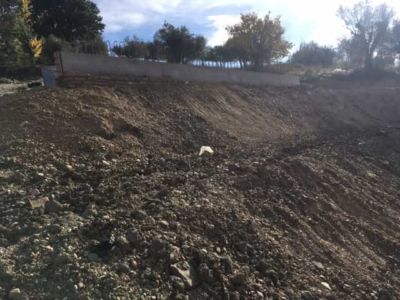 Looking Up to Retaining Wall 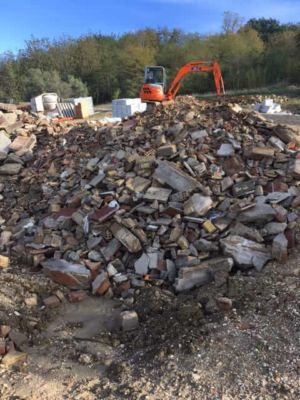 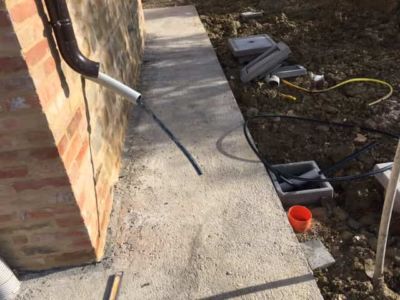 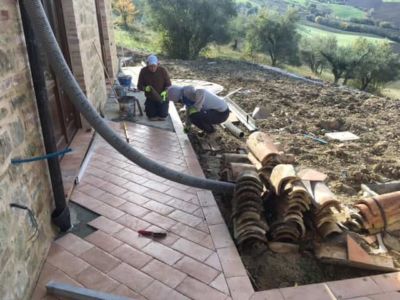 Tile Along the Back 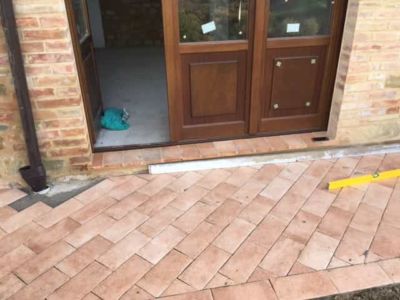 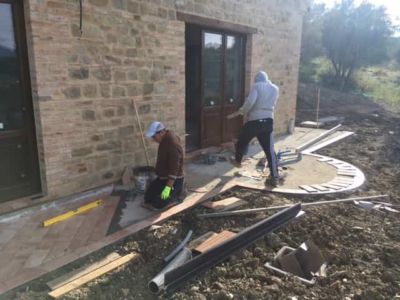 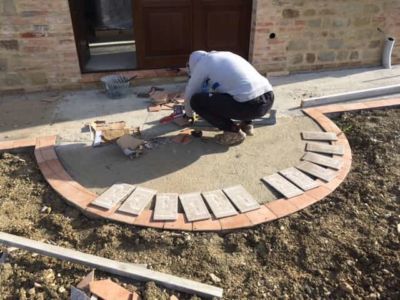 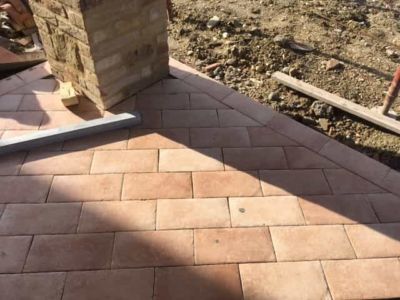 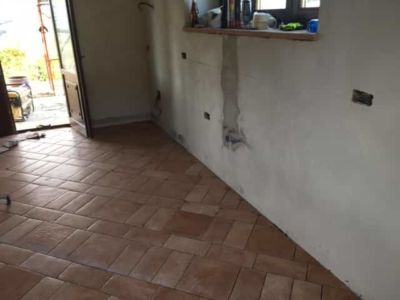 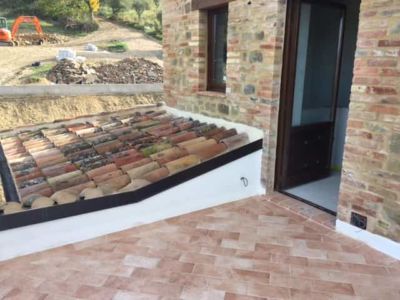 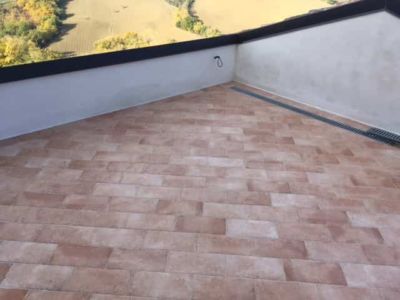 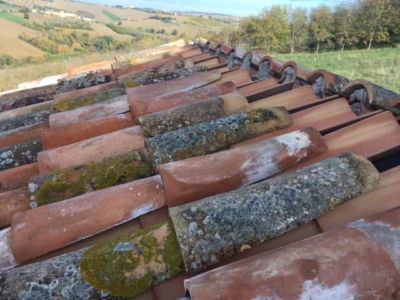 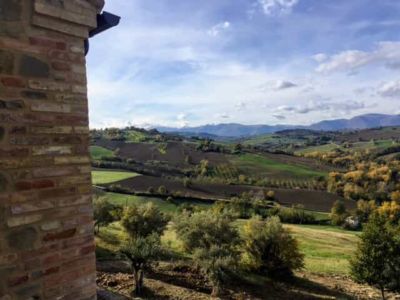 Southwest from the Terrazza 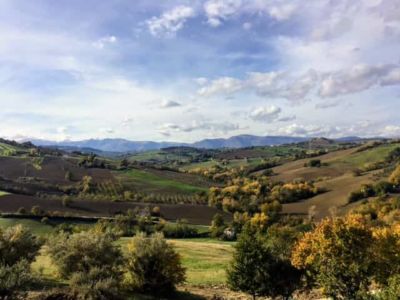 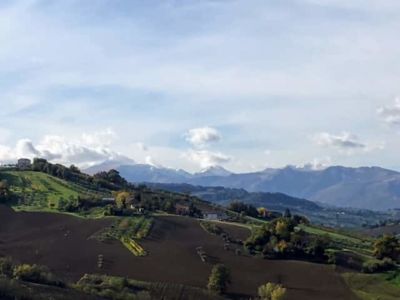 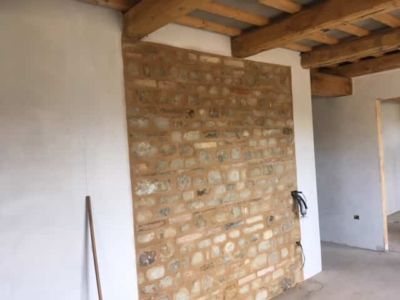 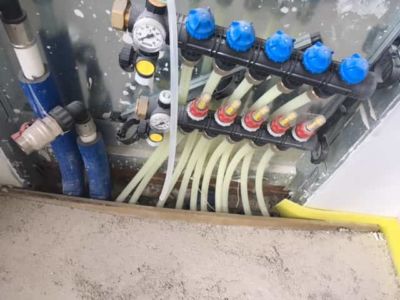 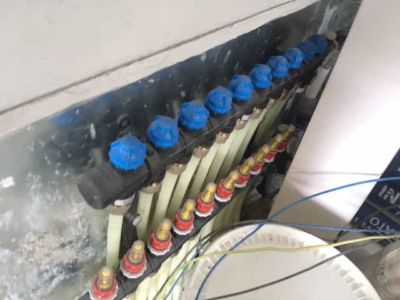 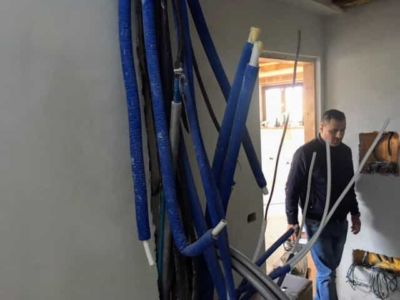 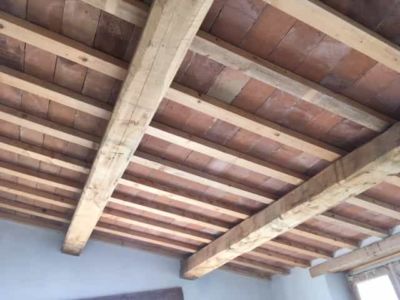 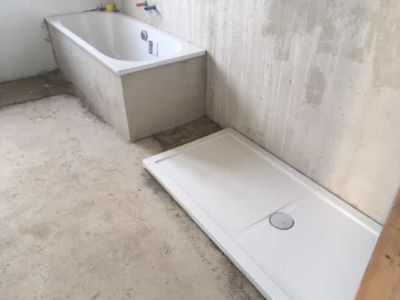 Upstairs Bathtub and Shower Base in Place 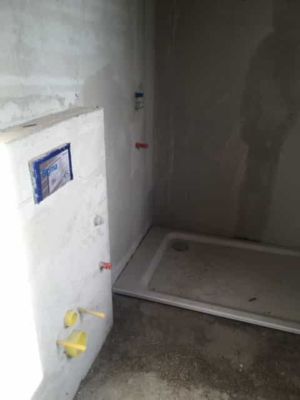 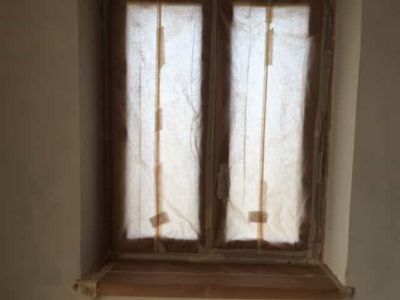 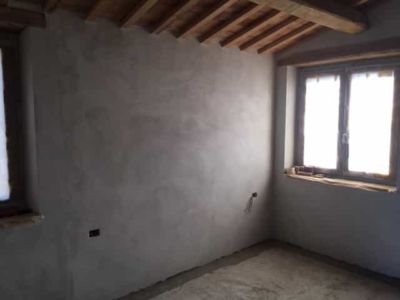 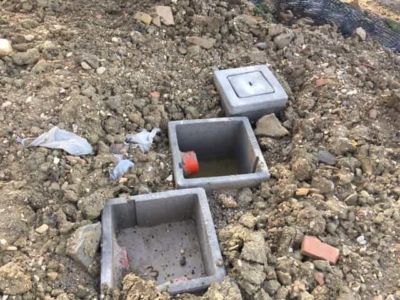 Many months back, I had noticed that there was an awkward place where the roof sections came together near the terrazza. It leaves a gap in the profile of the front side of the house that I didn’t like.

Now that the terrazza is built and the roof sections are in place, I see that I was missing the actual problem. Yes, the look of the area is a bit off, but the real problem is that the walls of the terrace are very low in places, maybe only 50cm (20in) or so. That seems like an accident waiting to happen. It would be very easy to just topple off the terrazza and crash to the ground.

Kevin had missed this detail, too, but saw the problem after I mentioned it. He proposed a railing at 90cm (36in), saying that was standard in Italy.

My quick check of US building codes told me 90cm wasn’t enough. We needed more like 110cm (44in), so the railing is above the waist of most people, making it harder to fall over it.

So, we settled on 110cm. Now, what should the railing look like?

We saw two constraints, one caused by the profile of the roof sections. They aren’t a uniform height, so to have a top rail at 110cm the vertical bars need to be different lengths. Plus, since the appearance concern was still with us, we need to have the railing blend into the house as much as possible.

Kevin sent us 7 choices, asking us to pick two that he would get bids on. There was only one fairly simple option and even it needed to be simplified further.

This option was just horizontal top and bottom pieces, with vertical pieces in between. However, it had a decorative element in the middle of the verticals. We ditched that. Kevin will now get some bids.

The other metal working project is for a handrail in the stairway. Kevin send along a series of options here, too. Wanting to go simple here, too, we picked two possibilities, very similar except for the profile of the rail itself.

Cost of the two handrails was very similar, so we chose the one with the curved edges, thinking it would be more comfortable. Cost of the terrace railing was higher than we expected, but we really have no choice: the terrazza is an accident waiting to happen without it.