After our exploratory visit and lunch at IKEA, we headed for our hotel in Ancona. It was on the coast north of the town center, toward the airport. Called the EGO Hotel, it was quite stylish and modern. Being that it’s primarily a business hotel and being a Saturday, we among the few guests so were given a very nice room on the sea side of the hotel. It had a very fancy bathroom with a huge whirlpool tub with a rain shower head above and, of course, a bidet. 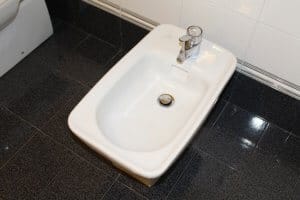 Having discussed bidets a number of times during the trip and having no personal experience with their use, we Googled “how to use a bidet.” Hilarity ensued.

Anne found a very entertaining video built from interviews of people after their first bidet use. It was well edited and quite funny. We learned a lot from it and other amusing internet sources.

Up at 4:00 the next morning, we headed to the airport. Munich first. Then Frankfurt, where I was selected for a security check at the gate. Shoes off, a few questions from a stern official about my luggage, I was cleared. Nine hours later we were at O’Hare and then home.

It had been a productive but exhausting trip.

At dinner last night, still trying to avoid a refueling charge from Hertz, I get my 20 changed for smaller bills. Then on the way to the airport, I’ll have another go at the pump.

Flight is at 6. Airport only about 15 minutes away, plus gas up time. Even though I know the airport is small, I figure I should arrive by 4:30 or so. Lufthansa makes you check any bag over 8kg, so I need to check mine. I don’t want some bureaucratic problem to make me miss the flight.

At the pump. I put in a 5. Only will take 1.25€, about a liter’s worth. So I was really close last night, even though the gas gauge didn’t show it.

I take the keys back into the building where I arrived. No one there, so I just put them on the drop box at Hertz.

After about 15 minutes, there’s still no one else in the building. Hmm. I don’t see check in desks, either. So I go exploring. 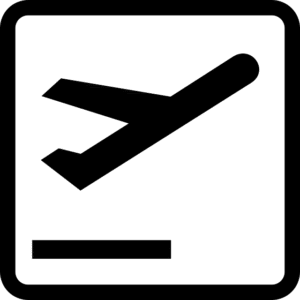 Finally I discover another building, a couple of hundred yards away, not connected to the other except by an outside sidewalk. It’s for departures. Two buildings. No signs pointing from one to the other. Only 3 departure listed for the morning, maybe for all day. L’Aeroporto delle Marche.

First stop is Munich. Nice airport, but it’s 7:30 and a two and a half hour layover. Too early for beer for me, even in Germany, but I see a couple of guys who disagree. I opt for scrambled eggs and smoked salmon. Total: 8.50€. I love these airport prices.

Frankfurt next. It’s not as nice as Munich and has one very annoying practice. You’re told that your gate is in the Z concourse, but no gate number. Concourse Z is one big duty free mall. I assume they don’t tell you your gate right away so you mill around and buy stuff that’s no cheaper than at home. Now it’s time for that beer.

My flight is supposed to start boarding at 12:20. About 12:15 I check the monitor. Now it’s not just no gate number. No flight to Chicago listed. Did my watch stop?

I spot another United flight from gate Z20. I figure my only option is to go there and try to figure out what happened. On the way, I see a crowd at Z15. Chicago flight. Who knows why it wasn’t listed and how everyone else knew where to go.

Finally, off to home. Across the aisle from me are two women, a middle aged one and I assume her mother. They spend the entire flight mostly yelling at each other in a language I don’t recognize at first, but finally realize is some Italian dialect. I’m hearing capisc’ and be’ and a few standard Italian words.

On this flight, the economy section is packed. No empty seats. But the economy plus section is almost empty. But if you want to move there, it’s $129, but I’d bet some people were booked economy and “upgraded” there. No luck for me.

Once we land, I take advantage of Global Entry to go through passport control quickly. But then the bags take forever to come out.

Finally, about 6 on Halloween night, I arrive at home, about 22 hours after I woke up.

Overall, a good, but scary, trip.

For this trip, I decided to trying flying into Ancona. It requires a connection somewhere, this time Munich, so instead of arriving in Rome in the morning, arrival is late afternoon in Ancona. 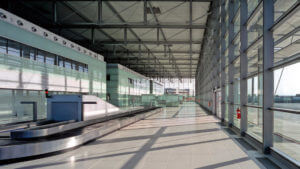 Good call. I avoided Rome Fiumicino airport and its confusing set-up. Ancona airport reminds me of Nantucket or Asheville, but more modern and nicer. You go down the stairs off the small plane, walk about 100 feet, pick up your bags, and leave. (I had entered Europe — the so-called Schengen zone — in Munich, so I just got a question about where I was going from the local authorities.) Rental car desk right there, car in lot about 100 feet away. Off plane and in car in 15 minutes.

I also shortened the post-flight drive considerably. Even with the new road through the mountains which was just opened, the drive from Rome is about 3 hours, compared to 45 minutes from Ancona.

I recommend this route for all our hoped-for visitors.

I have a lot of things to write about my week in Italy, but I think I’ll start with the earthquakes.

I arrived Monday afternoon and went to Urbisaglia where I stayed in a small, older hotel in the village center until Friday morning. It’s located about where the blue circle is on the map of the quakes that’s on the right of this page.

Wednesday evening about 7:10 pm I was in my room and it shook a little bit. Just a couple of seconds but very noticeable. This one was magnitude 5.5. I figured it was an aftershock to the August 24 quake — rather than being a before-shock for those to come.

About two hours later I was at dinner about 3 miles away, on the bottom floor of a newer (1960s? ’70s?) building and the shaking started again. Everyone bolted for the door, including me, of course. Outside, people were visibly shaken. Some were crying.

The shaking lasted longer this time and was stronger, measuring 6.1. (That difference from 5.5 doesn’t seem that great, but the scale is logarithmic, so this one was roughly 10 times as strong as the first one.)

When I returned to the hotel, the owner came to my room. He reassured me that the hotel was in a building that had been restored to meet earthquake standards.

There were some smaller shocks during the night.

On Friday, I went to the larger town of Macerata. Located where the red circle is, it’s the provincial capital and about 40,000 people, compared to about 3,000 in and around Urbisaglia. Lots of older buildings.

Saturday evening there was a small quake. You could see and hear the television rattle on the table. Magnitude 4.5.

Now the big one. Sunday morning I was just getting up, about 7:40. The room started to shake like crazy. I’m trying to figure out where to go. I’m not dressed, on the fourth floor, with no obvious place to go where the structure might be strongest. I’d say this was 10 seconds of serious fright. Once the shaking stopped, I got dressed, grabbed my stuff, and got to the ground floor and outside. This was a 6.6 quake, so about 30 times stronger than the first one on Wednesday.

Now I had just one problem. The car was in a garage a couple of blocks away and I needed to go back inside to get the keys to get the car.

I didn’t see any visible damage to the buildings nearby, but I wasn’t going to explore. I got the car and drove toward the coast. I wanted out of the hill towns. (My original plan was to go to a sagra delle castagne — a chestnut festival — in a small town in the mountains. It was almost certainly cancelled, but I wasn’t going there to find out.)

On the way to my next hotel near the coast and the airport, I decided to stop at IKEA just to what they had that we might use in the house. To my surprise, it was closed, at least for a couple of hours, I assume to check the building.

While this week and year have been very active seismically, history shows this level and severity is very unusual. I found a list of quakes in Italy. In Marche, there have been 9 over 5.0 Here’s the list, with dates, in order of severity.

So the top 3 and number 6 have been this year.

I’m hoping that the pressure on the faults has already released and we may be in for another quiet period. And our house is being built to standards to survive, at least long enough to escape, in an 8.5 or so, and there’s never been a quake nearly that big in Italy.

So the risk we do face is when we are in a village somewhere and there is a 6.0 or over.

I’m now back from my trip and a 4.9 aftershock was recorded today in the same area. Also, scientists are using satellite imagery to assess the quake and the likelihood of future events. Here’s a quote from a BBC story:

There remains the potential for future quakes in Italy’s Apennines region, say scientists who have reviewed the latest satellite maps of the region.The new radar imagery suggests Sunday’s big tremor ruptured a segment of a fault in between sections broken by two other quakes in recent weeks.But the Magnitude 6.6 event has still left the deeper parts of the fault system locked in place. And this unrelieved stress now represents a risk down the line.The researchers are keen to emphasize, however, that predicting precisely when and where a future quake might strike is not possible.”

To prepare for my trip, I just exchanged some dollars for euros at my local bank. While we own euros in one of our investment accounts, I needed cash and there was no easy way to actually get cash out of that account. 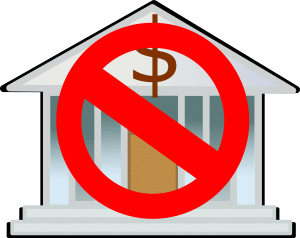 I’m glad I have a better way to do it for large amounts. Working through my investment advisor and Fidelty, we pay only 0.3%. I think we’d only pay 1.0% on a smaller amount.

Next time, I’ll see if I can do an exchange and get euros in cash through Fidelity.