To fill in between posts about the house, I thought I’d try an exercise. Write about places to see in Le Marche, with rules being I can only do research using Italian-language articles, and I’m going to look up as few words as possible.

Le Grotte di Frasassi, or the Caves of Frasassi, seem to be a good place to start. In north-central Marche, about 66km (40 miles) northwest of Colmurano and about an hour and a half by car, these are some big caves. The Italians like to point out that the cave just inside the present entrance could comfortably contain the Duomo of Milan, the third largest Catholic Church in the world, behind St. Peter in the Vatican and the cathedral in Siviglia, Spain. (We’re talking about a space about 400 X 600 feet and 650 feet high. In the vernacular, that’s about 4×2 football fields and really high: let’s say half the Empire State Building.) 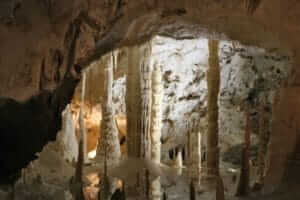 The caves weren’t discovered until 1971, when some spelunkers from a Marche caving club felt a strong breeze coming from a small hole in the ground. They had to enlarge the opening to get in, where they saw … a very small room, but with some small gaps where the wind was whistling through. After some days of digging, they finally were in a place they could stand and they saw … darkness. But big darkness. They dropped some stones off an edge they (fortunately) did see and estimated the fall at 100m (330ft). Watch your step! They called this cave “La Grotta Grande del Vento,” the Big Cave of the Wind.

The process that formed the caves started about 190 million years ago. So far, they’ve discovered over 40km (25 miles) of cave passages. One passage connects to an earlier-discovered cave, La Grotta di Fiume. Together, they form a large underground web under the land around the Comune di Genga, in the Parco Naturale Regionale della Gola della Rossa e di Frasassi.

Inside, the temperature is always 14C (58F) and the humidity always 100%. The air holds as much water as possible. The rest keeps dripping and forming the stalattiti e stalagmiti. (Those are your stalactites and stalagmites.)

You can take the general tour, of about 1600m (a bit less than a mile). (No photos, they say. That’s the special “Photo Tour.”) This tour is about an hour and 15 minutes and costs about €15. For those over 12 years old, there’s also the 2 hour Percorso Azzurro (Blue Tour), price unknown.

Last, there’s a Percorso Rosso (Red Tour), about 3 hours and described as somewhat challenging. In fact, the description on the website says, “you are hooked to a rope, turn to your left and try not to look down” over the 30m (100ft) drop. Then it’s Attenzione la testa! (watch your head!) and … di nuovo a piedi … (… back on your feet … ) so there are some low, narrow passages.

As a total aside, I visited Jewel Cave National Monument in South Dakota (180 miles of passages — a big boy cave) many years ago. They told us a caver can fit through a hole if it’s bigger than the span of your hand.

This is one of the biggest tourist attractions in Le Marche, but it’s mostly Italian tourists, not foreigners. TripAdvisor shows 1600 reviews in Italian, 100 in English.

So, I say we visit on a rainy day in the spring or fall. Do you want to join us? (You can go on your own on the Percorso Rosso.)

Image: By Kessiye (Flickr) [CC BY 2.0 (http://creativecommons.org/licenses/by/2.0)], via Wikimedia Commons